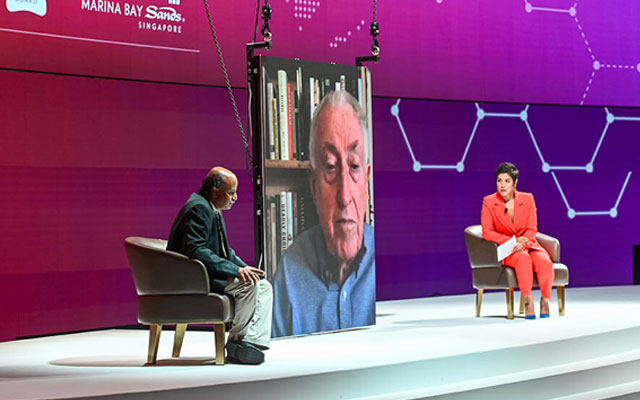 The event took on an online/offline hybrid format, with the live segment hosted at Marina Bay Sands Singapore, with support from the Singapore Tourism Board. Safe Management Measures for MICE Events, which includes Antigen Rapid Tests, zoning arrangements for attendees and safe distancing, was implemented.

Paul Tambyah, president-elect of the International Society of Infectious Diseases, said: “We depended on science and international organisations like the World Health Organisation (for information), but the (travel and tourism) industry needs to start commissioning their own studies. It is key to know what is going on around the world. You need to be aware of what’s happening in China, Mexico or West Africa.”

Joining the panel via live-stream from Melbourne, Peter Doherty, Nobel Laureate Professor and patron of the Doherty Institute, urged the travel and tourism industry to lobby national authorities to have a global agreement to “stop passenger planes right away” should a similar spate of infection flares up locally or “in any country across the planet”.

Doing so could limit the pandemic to a smaller scale and reduce economic damage, he remarked.

“We have been operating over the years on the influenza mantra, that you can’t stop the flu virus. But we stopped the planes in the skies for Covid-19 and we stopped the spread. So this can be done,” Doherty said.

Both medical experts are optimistic about the vaccine developments, saying that it could help the world return to normalcy.

Tambyah noted that the new mRNA technology allows vaccine manufacturers to produce within weeks. “The people who make these biotech vaccines say they can produce within four to six weeks, even if there is a new strain of Covid going around, maybe Covid-21 or Covid-22,” he said.

In comparison, the flu vaccine is produced through a “tedious process” that could take months.

When asked if it was therefore safe for the world to resume travels, Doherty referenced the case of passengers who were infected onboard a September 2020 flight from Dubai to New Zealand. All the infected passengers were in aisle seats close to the index case.

“We see the same pattern with influenza. The virus doesn’t go through the air; they (inflect) people who are close by. I’d suggest getting a window seat,” he said.

With or without vaccines and imminent pandemics, Tambyah said people would have to get used to the idea of mask-wearing.

Doherty agrees that continued social distancing, mask-wearing and frequent hand-washing are wise even as people got inoculated, but said that past experiences have shown that people throw caution to the wind as soon as a bacterial outbreak is over.

While Tambyah acknowledged that it would be hard to sustain the current level of social distancing for a long time to come, he suggested that the pandemic could forever change the way people socialise and interact.

Citing an example, he said: “In restaurants you tend not to sit so closely to other people as you would at a bar. Maybe the way we interact is going to change. We are going to do more business interactions over three- or five-course meals, which isn’t such a bad idea.”