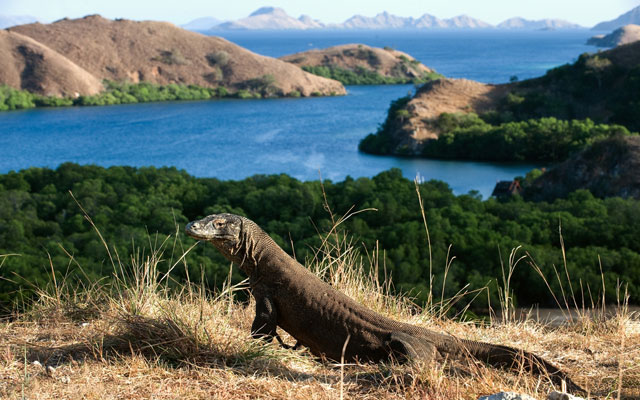 Protests have broken out over a string of new facility and infrastructure developments taking place in Loh Buaya, Rinca Island, the less-touristy neighbour of Komodo Island famed for its komodo dragon inhabitants.

The development, which is perceived as a threat to the natural habitat of the vulnerable species, received a barrage of criticism after a photo of a komodo dragon facing off against a big truck on Rinca Island went viral on social media, leading some netizens to dub the project “Jurassic Park”.

Speaking at an online press conference, Wiratno, director general for natural resources and ecosystems, denied claims that the government was turning Rinca Island into a “Jurassic Park”, clarifying that development works involved only the remodelling of existing facilities and infrastructure.

He said that the enhancing of existing facilities and infrastructure aimed to facilitate access to information in Komodo National Park to be more centralised and to support tourism in the Loh Buaya, Rinca Island. The project is targeted for completion in June 2021.

He explained: “An elevated deck will be built that can be used by tourists to observe the dragons from above. We also plan to build an information centre, where future visitors to Rinca, can not only see the dragons, but also enjoy the history and other stories of Komodo in there.”

As part of the facelift, the current pier will also be dismantled to make way for a new one shaped like a Komodo dragon’s Y-branched tongue, which will allow more ships to dock safely, according to Wiratno.

However, the Indonesian travel trade raised concerns that infrastructure development could threaten the Komodo dragons’ natural habitat, and even eliminate the island’s prestige and charm as a tourist attraction.

Questioning the purpose of Rinca’s revamp, Paul Tallo, chairman of the Indonesia Inbound Tour Operators Association, said: “Is this really for tourism? For tourists? Because (the development) is not what the tourism industry needs, and not what the tourists want.”

“We are very worried because the construction seems rushed – there is no broad and clear study, analysis, and thought regarding habitat protection and the fate of Komodo dragons and flora and fauna around the national park,” he added.

Agreeing, Leonardus Nyoman, director of Flores Exotic Tours, said: “The construction of this facility is contrary to the post-pandemic tourism trend, where tourists are looking for nature and sustainability.”

With this development, the government seems to want to turn Komodo National Park into a mass tourism destination, which could harm the habitat of the dragons, he added. “In fact, the biggest market currently is special interest. This shows that the government does not conduct market research before carrying out development,” he said.

Both Paul and Leonardus opined that the government fails to focus on pressing issues, such as human resources in tourism and public education about tourism, but instead builds things that are inconsequential and controversial.

Responding to the claims, Josef Nae Soi, deputy governor of East Nusa Tenggara, explained: “We will continue to strive to preserve (Komodo Island) by making it a limited destination. Therefore, Komodo Island, will still remain untouched by any developments and be pegged as a super premium destination with limited number of visitations.”

Loh Buaya on Rinca Island, on the other hand, would be open to a wider range of travellers, hence, the facility development, he said.

Josef vowed that the Komodo dragons and the sustainability of flora and fauna habitat in the National Park will remain top priority. He said: “Any development will ultimately aim to protect the Komodo dragons. There will be no construction of resorts, hotels, or tourist facilities that can interfere.”