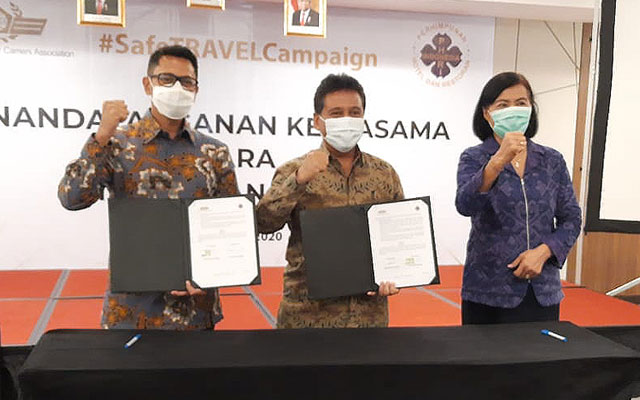 Indonesian hotels and restaurants are banding together with homegrown airlines to create affordable travel bundles in a bid to revive the struggling domestic tourism sector.

The Indonesia Hotel and Restaurant Association (IHRA) and Indonesia Air Carriers Association (INACA) have sealed an agreement to come up with attractive travel packages to boost domestic consumption.

The MoU was signed in Bali by the chairmen from both associations: Haryadi Sukamdani from IHRA, and Denon Prawiraatmadja from INACA.

The campaign series was launched on August 6 in Bali, followed by Medan and Yogyakarta, before returning to Bali last weekend. Each edition sees INACA and IHRA partnering with a different airline.

At the signing of the agreement in Bali, Denon said: “Today, we are facing a ‘fierce duel’ between health and the economy with this pandemic. For us in the industry, both are top priorities. We need to create a pattern to stop the virus from spreading out and at the same time, (create an environment that) will allow people to do their activities without too much fear.”

Both Denon and Haryadi said the joint campaign was historic for both associations as they were aligned around common goals, and mutually beneficial to both ends. In turn, they expect to contribute to the country’s economic recovery.

To provide affordable travel, both associations plan to create flight and hotel bundle packages for both solo and group travellers, which would be accessible through the websites of all participating airlines and hotels.

Denon said: “As associations, we are providing the umbrella (agreement) and will let members come up with the B2B implementation agreement that will (allow each party) to maintain their profitability.”

Commenting on the agreement at the Waktunya Terbang campaign launch, Veranita said Indonesia AirAsia would follow up with negotiations with IHRA members.

“I am optimistic that we can materialise the cooperation. In fact, AirAsia already has the platform not only for air ticket sales but other products so that travellers can buy combined products at the same time,” she said.

Veranita stressed on various measures the airline has been taking to ensure the safety of operations and to regain air travel confidence. That includes a HEPA air filter which cleanses the cabin air every two to three minutes and filter 99.9 per cent of air particles including virus and bacteria.

Denon said the campaign, which works with INACA member airlines including AirAsia on recovery strategies, will continue to be rolled out in various tourist destinations across the country, with an aim to see an optimal rebound in domestic travel activities during the year-end peak season.