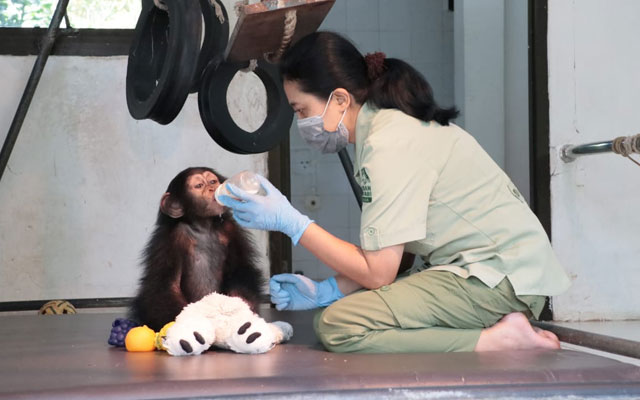 Temporarily-shuttered Indonesian zoos are struggling to afford animal feed, as well as ensure business continuity, as the coronavirus lockdown keeps visitors away.

However, she said, such capacity might last only until June. After which, the zoo would face difficulty feeding their animals, without the income generated from visitors since its closure on March 20.

“Batu Secret Zoo poses the hardest challenge because just for feeding wild animals alone, we have to prepare at least 500 million rupiah (US$32,600) a month. In total, we need nearly one billion rupiah a month (to feed all the animals in the zoo),” Titik said.

To ensure that the animals continue getting fed during this crisis, Jawa Timur Park Group has resorted to layoffs and pay cuts.

Titik said that her office had sent letters to the Health Care and Social Security Agency to defer insurance premium payments, as well as to the state-owned electricity firm PLN to get a discount for their electricity bills.

“Although we are closed, we still use electricity to maintain our rides and fun attractions. We are afraid that they will break down if we don’t turn them on (during the closure),” she said.

The Indonesian Zoo Association (PKBSI), which represents 57 conservation bodies that take care of a combined 4,912 species and 68,933 animals, has sent a letter to president Joko Widodo last week to ask for financial assistance from the government, ranging from tax relaxation to cash transfer from state budget or city budget, according to its chairman, Rahmat Shah.

“Although all zoos have shut down, we cannot stop feeding animals (during the closure). All animals in the conservation bodies are owned by the state and we (conservation institutions) are like day-care centres. So we have to get the government’s permission if we want to transfer or exchange animals,” Rahmat said.

Amid this crisis, he said, conservation bodies show varying degrees of financial strengths. Some 23.7 per cent stated that they have no financial capacity at all; while 23 per cent can survive less than one month; 34 per cent, one to three months; and 18.4 per cent, more than three months.

Zoos lacking the financial capability are now being helped by other members of PKBSI to feed their animals, according to Rahmat. “So far, all animals in conservation bodies across Indonesia are safe,” he added.

Both Ketut Widarsana, spokesperson of Ragunan Zoo in Jakarta, and Yulius Suprihardo, spokesperson of Taman Safari Indonesia in Bogor, West Java, said that their zookeepers are still working as per normal and they were doing their best to provide company and nurture for animals, but they now wear masks, gloves and other protective gear to prevent virus transmission from humans to animals.

Although the two sites have closed their doors to the public, animal care, cleaning and feeding continues, according to Ketut and Yulius. The sites and cages are also disinfected regularly to keep the animals safe.

PKBSI hopes that the government will provide immediate aid to zoos across the country as the sector employs 22,000 workers, attracts more than 50 million visitors annually, and contributes 500 billion rupiah a year to the country’s GDP.