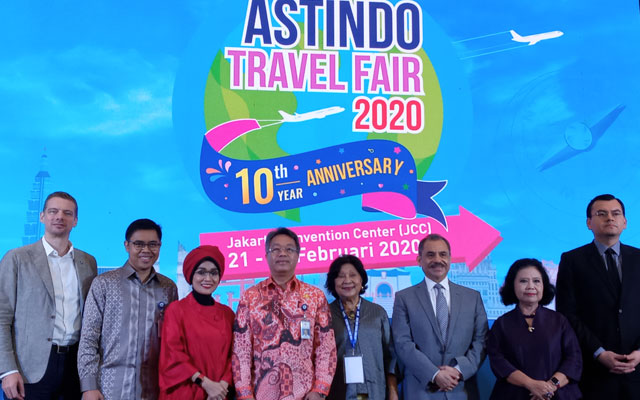 An array of attractively priced domestic tour packages were put up for sale at the 10th ASTINDO Travel Fair in Jakarta last weekend, all in a bid to encourage Indonesians to continue exploring and travelling amid the Covid-19 outbreak.

Some of the value deals available included a 3D2N Bali tour package by Santika Hotel and Citilink Airlines with subsidies from ASTINDO that went for just 2.3 million rupiah (US$168), and another to Yogyakarta for 1.6 million rupiah.

Determined to keep prices affordable, Sjahrul Firdaus, director of operations of The Indonesian Travel Agents Association (ASTINDO), said the association had voluntarily offset the price difference in airline tickets when fares were higher on certain dates or schedules.

New tours were also created just in time for the travel fair. Zahra Tour launched a new golf package to Bandung, West Java, while Kanomas Tour crafted a celebrity tour in partnership with local artists such as comedian-presenter Indra Bekti.

Regional governments are also doing that part to entice domestic travellers. Belitung, for instance, is creating more festivals that locals can partake in.

Isyak Meirobie, vice-regent of Belitung, told TTG Asia that Chinese tourists made up 20 per cent of the destination’s total arrivals. To make up for the loss of Chinese tourists during the Covid-19 crisis, he will rely on festivals and experiences, such as batik- and ceramic-making courses and cooking classes, to draw travellers from across Indonesia.

The Pesona Bedulang Belitong Nusantara festival on February 29 is one such example.

“It will introduce the tradition of local wisdom-based bedulang (communal) eating to travellers,” Isyak explained.

To further spur domestic travel interest, ASTINDO’s secretary-general Pauline Suharno said bank partner BCA Bank doubled the value of its cash-back to one million rupiah this year for transactions made at the fair, in addition to offering zero interest installments and travel insurance for packages bought on the spot.

Nia Niscaya, deputy of marketing at the Tourism and Creative Economy Board, who attended the opening of the ASTINDO Travel Fair, is expecting at least 13 per cent decline in foreign visitorship to Indonesia as a result of the outbreak.

The push for domestic travel will not only help make up the arrival shortfall and bring about much needed local economic stimulation, Nia said it could also drive home the message to the world that Indonesia is safe and hence boost traveller confidence.

ASTINDO is upbeat about the travel fair’s performance, projecting a transaction value of up to 253 billion rupiah from the Jakarta edition alone. While official attendance figures are not yet available, the event had targeted 150,000 visitors who got to meet with 150 travel trade players, including 50 travel agents, 16 major international airlines, and NTOs from nine countries.

ASTINDO chairman Elly Hutabarat explained that the travel fair this year had fewer participating airlines and NTOs compared to 2018 because of a deliberate reduction in exhibiting slots for sellers that failed to perform last year.

“This fair is for selling, not branding,” Elly emphasised.

The ASTINDO Travel Fair was also held in Palembang last week, and will head to Padang, Bali, and Surabaya from March 6 to 8.