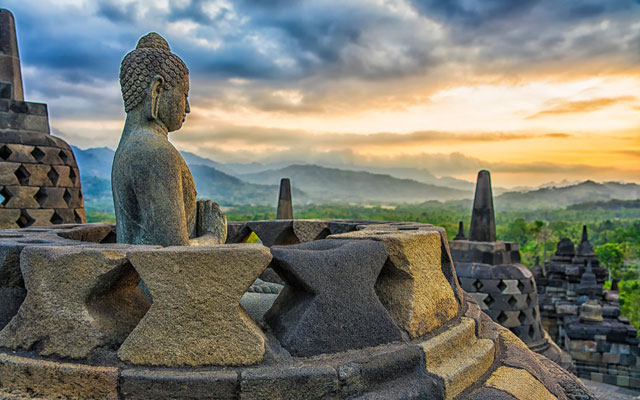 Travel trade players in Yogyakarta have been dealt a second blow with last week’s closure of the top levels of the Borobudur temple to visitors due to a conservation campaign, following the hike in ticket prices to the temple.

The Borobudur Conservation Agency (BKB) has banned visitors from entering the ninth and 10th levels of the Borobudur temple to prevent irresponsible actions that may threaten the conservation of the temple, such as climbing or sitting on the stupa walls, littering, vandalism, sticking used chewing gum on stone surfaces, smoking, and performing Parkour on the stupas.

The agency found 3,074 stains of used chewing gum in the temple, including 590 on the top levels.

During the closure that runs from February 13 for an unspecified period, BKB allows visitors to enjoy the views of Borobudur from the eighth level.

The temple’s partial closure is part of a monitoring programme that aims to check several aspects, such as the maintainability of the stones, the stability of the structure, the impact of visitorship, and damage to the main stones of the stupa structure, according to a press release by the agency.

Edwin Ismedi, managing director of Trend Tour & Travel, said that while some of his inbound Malaysian visitors were understanding about the restriction, the majority protested against it since the main purpose of visiting Borobudur was to access the temple’s uppermost levels.

Raising doubts about BKB’s statement on the discovery of many used chewing gums on stone surfaces, Edwin said that tour guides who visited the venue daily reported that they never witnessed such irresponsible behaviour.

Visitors also now advise one another to not climb the stupa walls and litter, he added.

Similarly, Shelly Henry, managing director of Chacha Tours, said that she had received complaints about the ban from her business partners in Malaysia and Singapore. They requested the Borobudur entrance ticket of US$25 to be cut to compensate for the closure of the temple’s top floors.

This adds a further damper for travel agents, after Taman Wisata Candi (TWC), a company that manages the temple, raised their prices on January 1 from 475,000 rupiah (US$34) to 500,000 rupiah for foreigners.

Shelly said that the sudden price hike meant travel agents had to shoulder the price difference for contracts inked before the change.

Edwin expressed concern that the yearly ticket price hikes to the Borobudur temple may deter travellers from visiting Yogyakarta, and instead opt for Vietnam or other countries with similar attractions.

He added that there have yet to be significant improvements made to the services for the Borobudur Sunrise and Sunset tour packages since the price hike earlier this year.

A cheaper alternative, according to both Edwin and Shelly, is to catch the sunrise from the hilltop of Punthuk Setumbu, located west of the Borobudur temple.