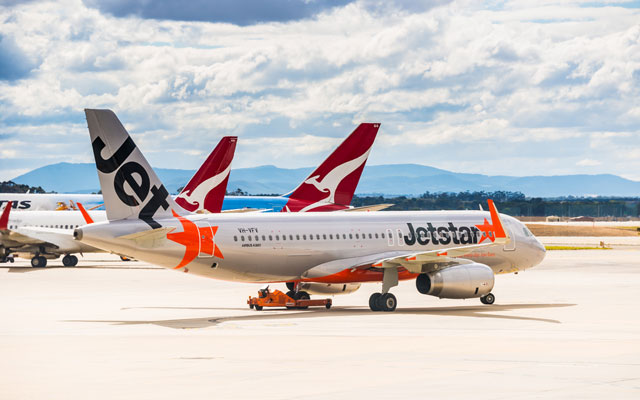 Qantas International and Jetstar Group have made temporary reductions to their flight schedule in response to a drop in demand due to the Covid-19 outbreak.

Qantas International will cut 16 per cent of Asia capacity until at least the end of May, a move that will impact flights from Australia to China, Hong Kong and Singapore.

Its Sydney-Shanghai service will remain suspended; flights from Sydney, Brisbane and Melbourne to Hong Kong will be reduced; Melbourne-Singapore service will be operated using a Boeing 787 instead of the larger Airbus 380.

Jetstar Group will cut its capacity to Asia by 14 per cent until at least the end of May 2020, impacting flights from Australia to Japan and Thailand, and intra-Asia flights.

Cairns-Tokyo (Narita), Cairns-Osaka, Gold Coast-Tokyo (Narita) and Melbourne and Sydney-Phuket will each be reduced by up to two return flights per week.

Jetstar Asia (Singapore), Jetstar Japan and Jetstar Pacific (Vietnam) have suspended flights to China and are reducing flights across the region. In particular, Jetstar Asia is reducing total seats by 15 per cent.

There is no change to other key parts of the Qantas International network, such as the US and UK.

Qantas Group CEO Alan Joyce said the measures will help the company to limit exposure to softening markets impacted by the outbreak.

“We can extend how long the cuts are in place, we can deepen them or we can add seats back in if the demand is there. This is an evolving situation that we’re monitoring closely,” he said in a statement.