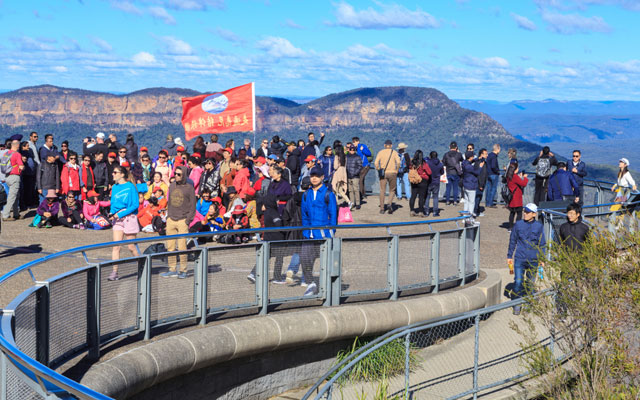 Australia’s tourism sector is facing a double whammy, with the coronavirus dealing a second blow and causing further disruption to an industry that’s still reeling from the damage caused by the bushfires.

China’s ban on outbound group travel led to about a quarter of all Chinese tourists to Australia cancelling their travel plans. This was followed by the Australian government’s decision over the weekend to ban all travellers from China, except for its own citizens and permanent residents. As well, Qantas Airways has suspended its two direct flights to China from February 9 to March 29.

These latest developments could mean that things may take a turn for the worse before the situation improves for local tour operators.

Tourism businesses across the country are telling a tale of financial devastation and warn of wider impacts on businesses and communities. Unsurprisingly, the impact is being felt the keenest in locations that have been most popular among Chinese tourists, such as New South Wales, Victoria and Queensland.

Daniel Gschwind, CEO of the Queensland Tourism Industry Council, said: “We’re getting reports of mass cancellations and significant loss of revenue. I’m talking hundreds of thousands of dollars for individual businesses, and many millions of dollars for the state.”

“The (Chinese) market is very significant for Queensland, particularly for destinations like the Gold Coast, Brisbane and Cairns, where the overall Chinese market is about 500,000 visitors annually. A good portion of that is through January and February because of the Chinese New Year (holidays),” he added.

Gschwind believes the loss accounts for at least a quarter of about A$1.3 billion (US$869 million) in annual income to the state. “On the back of the bushfires, which also affected Queensland, (the Chinese travel restrictions) are pushing many businesses to the limit.

“We’re already hearing of staff layoffs in some businesses and significant concern over the revenue loss, not only revenue looking forward, but also the expectations for the (travel agents and tour guides) to refund pre-payments for any travel at the moment. So it is a very, very heavy blow to the tourism industry, obviously nationally, but particularly in Queensland.”

China is currently Australia’s largest source country, with short-term arrivals of 1.5 million up to June 2019, and spending to the tune of almost A$12 billion. Arrivals grew at a compound growth rate of 15 per cent a year since 2009, causing many tourism businesses to shift their focus to the country known as the world’s most significant tourism source.

“Australian tourism has become very reliant on China,” said director of the Griffith Institute for Tourism, Sarah Gardiner. “We probably haven’t seen the full impact of the current events (yet) … so we’re going to need some really strategic thinking and strategic actions to try to assist tourism businesses to navigate this very difficult period.”

Gardiner, who is based on the Gold Coast, said her anecdotal observations of tourism operators still paint a positive outlook for the Chinese market. “But I think we’ll see the full implications of this come through over the next few weeks,” she said.

“Interestingly, even before all of this happened, the (Australian) tourism industry was aware that it was becoming too reliant on China and so it was starting to shift towards other international markets such as the US and the UK. I just think this has probably added further weight to the idea that we need to diversify our mix of markets to make sure that we’re not overly reliant on one particular market,” she added.

But both Gardiner and Gschwind are upbeat that the tourism industry will bounce back swiftly from the coronavirus epidemic, citing the industry’s resilience during the post-SARS recovery phase in 2003. “In fact, there was even a bit of pent-up demand (during that period),” Gschwind said.

However, he added, in order to seize the opportunity when it comes, businesses need to be kept fully staffed and running. “But that is a big challenge because unlike other disasters, including the bushfires, where people can point at damaged infrastructure, we can’t see the physical damage (the coronavirus) has done to businesses. How we can directly support and make sure these businesses stay afloat is a big challenge.”

Gschwind also noted wider implications beyond tourism. “When income goes down, the whole community suffers (as) many of these regions are so heavily dependent on tourism. We may be on the frontline, but this is not just a tourism issue; it is an economy and community-wide issue,” he said.

The coronavirus’ impact on travel has also prompted a response from Australia’s tourism minister Simon Birmingham, who noted that the country’s seafood export sector and other high quality product suppliers that usually go to China as part of the Lunar New Year celebrations have also been hard hit.

“That’s why it’s more important than ever that we continue to pursue new trade opportunities, whether it’s with Indonesia, the European Union, India, or elsewhere,” he said.

Already, the Australian government has pledged A$76 million in funding for the tourism industry in response to the bushfire crisis. Birmingham said his department will now consult again to recalibrate investments where necessary in the wake of the coronavirus.

The twin impacts of the bushfires and coronavirus mean Australia is looking at “a pretty tough year in 2020,” said Gardiner. “But I’m confident that Tourism Australia and the industry are working quite hard to ensure Australia is high on the must-see tourist destination list. So I think moving forward, we’ll see some good recovery out of these visitor numbers.”