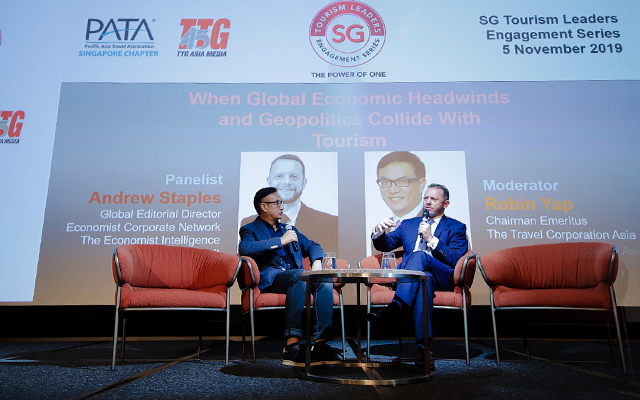 The global economy is in a challenging state, faced with the threat of ‘slowbalisation’, where the world is turning against globalisation, and rising geopolitical risks, according to Andrew Staples, global editorial director of the Economist Corporate Network, The Economist Intelligence Unit, who spoke at the inaugural SG Tourism Leaders Engagement Series last Tuesday.

“This is an age of anxiety, due to VUCA (volatility, uncertainty, complexity and ambiguity),” Staples emphasised.

“On the one hand, economic growth in financial markets like the US are doing pretty well, at record levels even, and unemployment is in multi-decade lows. In terms of monetary policies, interest rates are virtually zero in most advanced economies around the world. These should be spurring economic growth, yet on the other hand, there is a lot of uncertainty around the world.

“Some of the uncertainty is coming from (US) president (Donald) Trump who is challenging trade relations with China, questioning (the US’) relationship with Europe through NATO, and more. The US, as a global central power, used to quietly support things like the World Bank, the WTO, IMF and all the important infrastructure in the global economy. All that is being questioned now,” he explained.

Closer to home, demonstrations in Hong Kong are also hurting regional economic performance. A recent study by The Economist has placed Hong Kong in a technical recession, due to two negative quarters of growth.

In his presentation, Staples highlighted that the global GDP has slowed to 2.3 per cent in 2019, down from 2.8 per cent last year, with Brexit hurting investment confidence and Germany flirting with recession.

“Global trade this year is expected to post some of the lowest growth rates we’ve seen in the past 11, 12 years since the global financial crises of 2007 and 2008,” he said.

Amid the dreary outlook, Staples offered a sliver of hope through data that pointed to continued economic growth in Asia.

When asked by session moderator Robin Yap, chairman emeritus of The Travel Corporation Asia, what these projections mean to Asia’s tourism industry, Staples said: “You (tourism players) are in a really good sector. Look at the predicted drivers of growth – emerging economies, growing affluence, greater adoption of technology – that are in your favour.

“The Economist did a research and identified a growing band of people around the world, which we call the Globally Curious. These people are sincerely interested in what is happening around the world and want to learn more. This strata of people will grow, and they will look for more opportunities to travel and learn about other societies and countries.”

“Asian economies are still performing and there is growing affluence (in the region). At the same time, low-cost carriers (LCCs) are expanding in Asia along with an Internet proliferation which has made travel purchase far more accessible to everyone. These factors are feeding tourism growth,” said Wong.

ForwardKeys data has recorded growth of at least 12 per cent in travel bookings issued for the period November 2019 to April 2020 for all countries, with the exception of Hong Kong and Sri Lanka.

Vietnam sees the strongest forward inbound booking growth at 33 per cent, followed by Japan at 27 per cent.

“We do not foresee a decline in these numbers, as many countries are stepping up promotions and opening up new destinations for tourism. For cost-conscious travellers, Asia is always a more affordable option than longhaul destinations. Furthermore, regional business travel will remain fairly constant,” he added.

Wong believes Asian businesses will continue to be a major driver of tourism traffic in the region, “come rain or shine”.

“Asia sees a lot of intra-regional business travel. Business trips have to be made in good times or bad, although companies will relook their way of travel. In the event that business class and full-service airlines are cut, this region has many LCC options to keep people flying,” he said, adding that intra-Asia travel takes up approximately 65 per cent market share of global travel annually.