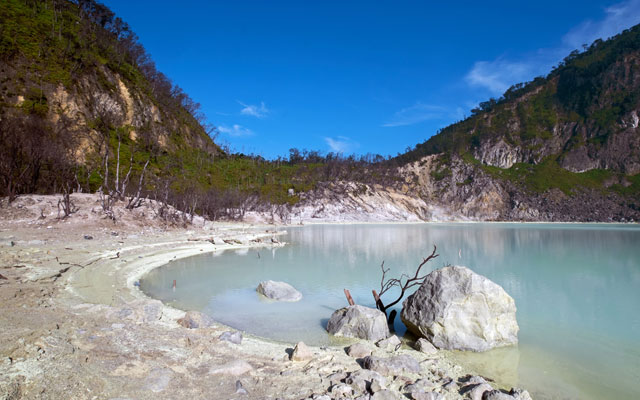 Travel trade players are anxious that the closure of the Kawah Putih, a crater lake in Bandung, West Java, due to forest fires would affect footfall to the increasingly popular tourist attraction.

The area’s management had closed off the popular attraction atop Bandung’s Mount Patuha since Tuesday due to forest fires. There were no casualties from the fire which broke out on Monday afternoon, according to the West Java Police, who is still investigating the cause of the fire.

Budijanto Ardijansyah, president director of My Duta Tour and chairman of the Association of Indonesian Tours and Travel Agencies (ASITA) West Java chapter, was dismayed to learn that the fire had destroyed new stairs built to create easier access to the crater for visitors.

Kawah Putih’s closure comes at a time when the spot is emerging as an attractive alternative to Tangkuban Parahu, a hitherto popular destination that has seen a decline in visitor numbers since the government’s implementation of a price hike.

“Kawah Putih is growing as a major tourist destination (in West Java). Many foreign tourists visit this site,” he said, adding that most of My Duta Tour’s foreign visitors to Kawah Putih came from Malaysia and Singapore.

Budijanto said he did not receive any reports of cancellations from ASITA members, as tour operations could still run normally by replacing the Kawah Putih attraction with other nearby destinations, such as Situ Patenggang Lake.

Bandung-based Exotic Java Trails Tours and Travel’s director Daniel Nugraha said that he was also shattered by the news report as Kawah Putih is currently more attractive to foreigners than Tangkuban Parahu.

This fire, he added, made him more stressful than the eruption of Mount Tangkuban Parahu months ago. His concern was that without proper and clear information, travellers would presume that the entire Mount Patuha was closed off and that might lead to cancellations.

“The fire rages forests surrounding the crater only. Nearby tourist destinations, such as Rengganis Crater, which is behind Kawah Putih, remain open,” Nugraha said, adding that he had replaced Kawah Putih with Rengganis Crater in his company’s tour itinerary due to the fire.

Daniel said that leisure travellers made up the bulk of visitors to Kawah Putih. However, next week, he would be hosting corporate groups from Malaysia and Singapore planning to visit Kawah Putih during their business trips in Bandung.

“What we can do today is to take a wait-and-see approach as to whether it (Kawah Putih) will remain closed next week,” he said.