A vintage tram takes a new life as a roving arts and social venue, thanks to a collaboration of local expertise. 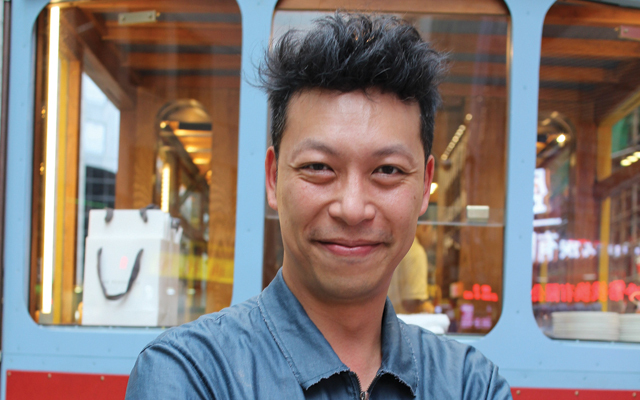 Since last September, an eye-catching tram can often be spotted plying the streets between Western Market and Happy Valley Terminus. But unlike the iconic double-deckers cruising the streets of Hong Kong, this bespoke teakwood tram is actually a mobile social club and premium event venue.

The Circus Tram, which sees a regular roster of performances by young talents on board, is the brainchild of Alvin Yip, partner and curator-in-chief of local creative startup Circus. After initiating the idea to Hong Kong Tramways, Yip engaged a team of designers, architects, artists and curators to build the nostalgic vehicle with the tram company from scratch.

“We (thought of Hong Kong’s) iconic 115-year tramways as more than a transportation means, and first brought this notion to life in 2013 at a design festival called Detour. Fortunately, we successfully obtained a subsidy to produce four prototype trams and reimagined them as various mobile spaces – a library, restaurant and performing theatre,” Yip said.

He added: “Evolving from an academic research to a cultural and art experiment and now a new operation, the (most rewarding part) was being able to engage young designers and artists to work with experienced tram technicians, engineers and craftsmen. I am proud to say that our first Circus Tram is 100 per cent made in Hong Kong and by hand.”

From the outset, Yip wants to breathe new life into a beloved transport icon of Hong Kong by engaging the locals. He has also opened up the initiative to tourists by partnering with The Peninsula Hotels’ Peninsula Academy.

“Hotel guests interested in cultural experiences may charter the whole tram or join the two-hour ride through the Peninsula Hotels. Unlike ordinary sightseeing tram tours, we combine a unique range of onboard experiences like fortune telling, music and a magic performance. Even if a tour guide is deployed, we stress interactive conversations rather than mundane presentations,” Yip explained.

The posh tram interior boasts three lounges: Chatham House on the lower deck, and The Freudians and Darwin Gardens on the upper deck. The tram also boasts first-of-its-kind features, such as a modern electrical and mechanical system that can support lighting and sound systems for events, as well as a restroom.

“Our second and third trams are in the pipeline with more interesting ideas – they are not going to be the same,” he shared.