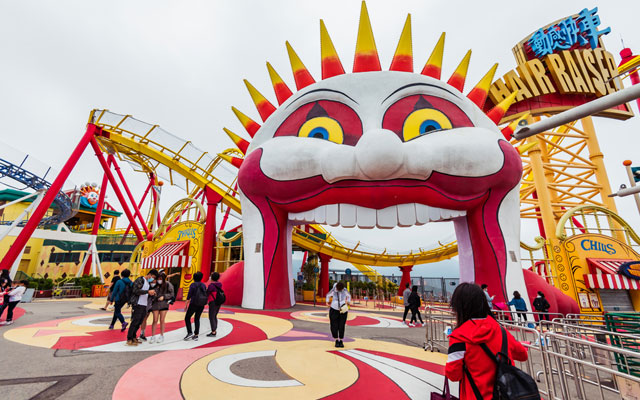 Tour agents in Hong Kong have cast a shadow of doubt over the financial viability of the government’s multi-million-dollar plan to transform the cash-strapped Ocean Park into an entry-free, adventure-themed resort destination within the next two to three years.

The fate of the city’s iconic theme park was decided after the government and Ocean Park Corporation completed a rethink exercise to chart the way forward for the park.

Under the plan, a new non-ticketed retail, dining, and entertainment (RDE) zone is to be created at the lower park area, which will be managed by a private developer under a long-term concession agreement. The RDE zone will house public spaces to host open-air markets and events, a children’s playground and water play area. Conservation and education-related facilities and attractions, including the Grand Aquarium and the soon-to-be-completed Steam Hub, will also be integrated into the RDE zone.

In order to become financially sustainable in the long run, the park will outsource part of its park area or facilities to different operators. With that in mind, a pay-as-you-go ticketing model is also being considered, in place of the existing pay-one-price model, to help boost the park’s attendance.

Other key components of the revamp include a new adventure-themed zone which could feature outdoor attractions, such as Xraycer and Zipline; as well as new wellness-themed zones for activities such as glamping, trekking, meditation, and yoga retreats. Some 12 aged rides including Mine Train and Raging Rivers will be phased out to make way for new facilities, including a line-up of 26 new rides.

The iconic Cable Car and the Ocean Express will be retained to connect the lower park area with the upper park area, at the same time, it has been proposed for a pier to be developed in the lower park area at Deep Water Bay so that the public can access the new RDE zone by sea in future. A plan is also being mulled over for another pier to be built adjacent to the Water World in Tai Shue Wan to boost connectivity between the two areas.

Slated for a summer opening, the long-awaited Water World will be the city’s first year-round, all-weather water park featuring 27 indoor and outdoor water attractions such as a man-made beach, a surf rider, and an eight-lane mat racer. A resort-style cabana area will also provide space for dining and relaxation. Operation of this facility will be overseen by the park, at least in the short- to medium-term, to ensure its early opening.

The secretary for commerce and economic development, Edward Yau, said the park will cut down on facilities and related expenses which are not cost-effective and re-orient its development focus back to education and conservation.

He added that the park’s transformation will “take time and resources”, thereby, requiring the government’s assistance in the following areas: bearing the costs for conservation and education work of the park for four years, deferring the repayment of government loans, extending the repayment period and waiving the interest, and providing a non-recurrent funding to help the park to cope with its present financial need.

The chairman of the board of the Ocean Park Corporation, Lau Ming-wai, said: “The new model of operation enables us to improve, innovate, and invigorate the park in the exciting years ahead. Our renewed direction embodies our vision of advancing Ocean Park into Hong Kong’s leading education platform, with a strong mission to promote environmental conservation and protection. Leveraging our exceptional location and with the launch of the Water World, we are confident that Ocean Park will play a pivotal role in the Invigorating Island South initiative.”

However, industry players have casted doubt on the viability of this new business model to sustain operations of the park.

While noting that the new operating and pricing models aim to achieve business sustainability, Gray Line Tours chairman, Michael Wu, expressed uncertainty as to whether it would work. He said: “I received phone calls from agent friends asking how we can promote the park in future when the pay-one-price model is removed, and clients have to pay extra on-site for certain rides and facilities.”

Instead, he proposed for the park to retain its basic admission fee model, with chargeable optional rides, citing the example of Chimelong Paradise in Shenzhen, where visitors are charged an admission fee which includes ride access, but have to fork out extra for shows.

Wu added: “To me, the proposal looks like a major landlord subleasing space and living on rental fee. The transformation is just for the sake of survival, without any proactive initiatives. With dolphin show to go off the list, what else can it excite visitors with?”

He also raised doubts as to whether a mere focus on conservation, education and natural beauty is able to achieve breakeven. While he does contend that “the ticket-free area at lower hill will be a mecca for domestic helpers” and “the Water World is set to draw more young visitors who rarely see such scale and design in the region”, he also stressed that “in the long-term, the park needs to reinvent to stay competitive and draw repeated visitors”.

W Travel Service managing director, Wing Wong, opined that the free admission would not be enough to attract visitors. “As far as I know, the mainland Chinese aren’t keen on ocean conservation and nature protection. Under this new model, I doubt how it could generate more income if there are no new exciting ideas – those wellness ideas like yoga and glamping are only gimmicks.

“Also, although Water World is an all-year round attraction, it may face a seasonal demand issue. It may be worthwhile to make money in real estates, developing some prime spots in order to drive regular income.”

Last year, the park obtained the Legislative Council’s funding approval to support its operation for a year. Under this new move, the government will pump a maximum yearly financial assistance of HK$280 million (US$36.1 million) into Ocean Park for four financial years starting from 2022-23 to support the education and conservation initiatives in its future strategy.