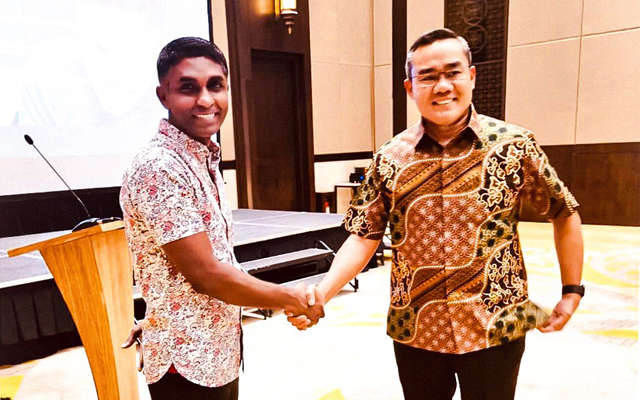 The partnership will see Bayu Buana own a 51 per cent stake in Bayu Apple Holidays, the new Bali-based joint venture company which is trading as Apple Holidays Indonesia.

Agustinus Pake Seko, president director of Bayu Buana Travel Services, said: “The number of arrivals from India to Indonesia has been growing significantly. Data showed that arrivals from India between January and June 2019 were 188,095, the third biggest market to the country after China and Australia. Some 55 per cent of the Indian arrivals are to Bali.”

“India is currently the second biggest outbound market (in the world) after China, with numbers expected to reach 50 million next year. As such, the opportunity to grow the market is huge,” he said.

“We are optimistic that the joint venture will be able to boost arrivals and contribute to achieving the government’s target of 800,000 arrivals by the end of this year.”

India is already the biggest market for Apple Holidays, the inbound company of Sharmila Travels and Tours which also operates in Singapore, Malaysia, Sri Lanka and Maldives.

Forming a joint venture with Apple Holidays – which boasts a strong network across India with its eight offices – is hence a strategic way to grow Indian inbound business into Indonesia, said Agustinus.

And with cases of Indian agents failing to pay for rooms having marred the trust of some Bali hotels in the market, Agustinus believes that Bayu Buana’s long-standing reputation and extensive network as a 47-year-old Indonesian travel company will stand to benefit Apple Holidays’ foray and expansion into Indonesia.

Both companies are not strangers to each another, he added, as Sharmila Travels and Tours and Bayu Buana are the local partners of BCD Travel in their respective countries.

“Pradeep Kumar (Apple Holiday’s managing director) and I are both members of the advisory board of BCD Travel, too,” said Agustinus.

When asked if Apple Holidays Indonesia would form a threat to Bayu Buana Travel Services, which has its own inbound division with operational offices in Bali and Bandung, Agustinus replied: “We will let them compete. Without the new company, our inbound division is facing competition from others anyway.”

“For us, it is like having two vehicles (with the joint venture). If (the Bayu Buana division) loses against Apple Holidays Indonesia, we are not totally at a loss as we still have 51 per cent in the joint venture. We also see this as an opportunity for each party to benchmark against each other to grow,” Agustinus remarked.

“We have been planning to go regional for some time, but that does not mean that we have to do it alone, and for us it does not matter if we do not flag our own brand out there as long as we (partly) own the company,” he said.

Meanwhile, Bayu Buana aims to acquire around 50 per cent shares of Apple Holidays, which is currently in the process of moving its headquarters to Singapore.