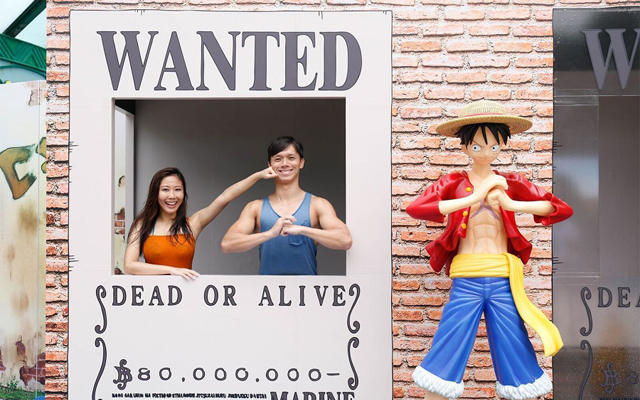 From now until September 1, the Waterfront Plaza at Ocean Park Hong Kong has been transformed into a water battle zone where guests will face off against each other in classic scenes from One Piece. To celebrate the 20th anniversary of One Piece’s characters, Luffy and the Straw Hat crew members will also be visiting the park, and fans can relive their epic adventures in seven encounters and photo spots.

Highlights include the Thousand.Sunny Ship by the park’s lagoon, the bounty posters, a super-size fountain in the shape of Luffy’s signature straw hat, and more. Guests can also grab their water guns and join Luffy’s crew to fight against the Marines in a throwback to the Battle of Marineford while dodging water cannons and traps.

At the Whiskers Harbour kids zone, there will be various One Piece-themed water attractions including a foam party zone, straw hat water-mist arches, super water curtains and fountains.

Aside from One Piece-themed food items found at The Terrace Café Aqua City Bakery, fans can also look out for the exclusively designed Luffy Themed Topper Cup and Chopper Themed Topper Cup, as well as the Chopper Popcorn Set, available at designated food kiosks in the park. Limited-edition merchandise including T-shirts, summer clothing, waterproof phone cases and exclusive One Piece gifts at the park’s retail shops and game booths are also available.

In addition to water attractions, Ocean Park Hong Kong is also adding a brand new technology-enhanced ride. Following the launch of Hong Kong’s first-ever virtual reality (VR) roller coaster, this summer the park will unveil Hong Kong’s first VR free fall ride, The Abyss – VR Space Voyage. Riders will have to put on VR headsets for the ride, and will experience outer space, as well as a free fall that reaches terminal velocity.