Now that Belitung has become a hot domestic destination, the next step is for  the destination to step up its pursuit of the international market. Does Belitung have what it takes to attract more foreign visitors to its shores?  Tiara Maharani finds out 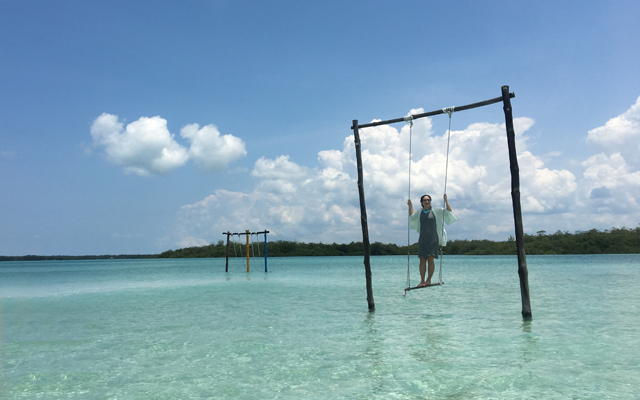 Having emerged as a hot domestic travel destination in recent years, Belitung – an island east of Sumatra – is now set on transforming itself to make its mark in the international travel community.

The central government has committed to growing tourism in Belitung, with Tanjung Kelayang earmarked as a priority destination. There, the Ministry of Tourism has unveiled grand ambitions to create a new Nusa-Dua-like complex in a 324ha area, which will also embody the concept of sustainable tourism.

Arief Yahya, minister of tourism, said: “We will build Tanjung Kelayang as an integrated resort destination, which will be home to high-end hotels and resorts, a retail village as well as international restaurants, conference centre and other attractions.”

As well, Arief believes that Tanjung Kelayang, situated along a pristine beachfront, is well placed to capture the growing “bleisure” market, benefiting from its unique mix of corporate and leisure facilities and strategic location.

The Tanjung Kelayang area will be built gradually, with the first phase expected to be completed in five years. By end-2019, the destination will see the launch of the 180-room Sheraton hotel, which will be followed by Sofitel and MGallery properties next year.

Arief commented: “The recent development of Tanjung Kelayang has further raised Belitung’s attraction as a fresh destination, which can be seen from the (increasing) number of visits to Belitung.”

Belitung’s tourism growth has had a positive ripple effect on the hotel industry. According to the Central Bureau of Statistics, there were 1,940 star hotel rooms in 2018 – up from 1,781 rooms in 2017.

The geographic proximity to Jakarta – an hour’s flight away – has also facilitated Belitung’s growth as a tourist destination, attracting hospitality brands like Golden Tulip, Fairfield by Marriott, Santika Premiere, and the latest, Swissbel Hotel.

To grow air connectivity, the regional government has approached a number of airlines to mount flights to the destination, including AirAsia as well as carriers flying to Thailand, Isyak Meirobie, deputy regent of Belitung, told TTG Asia. “China is one of them. At this point, we are still in talks,” he said.

However, at press time, Garuda Indonesia has just announced the axing of the the four-times-weekly Singapore-Belitung service, which had only began operations in October 2018.

With the closure of this Singapore connection, inbound agents fear that the positive momentum Belitung is starting to see for the international market in the past six months will be lost.

“The number is not in hundreds, but every week there are (overseas) groups that come (to Belitung),” said Yudianto Evan Setiawan, director of Billitonesia Tour. “A few groups were planning to visit Belitung in June-July, but this (service) closure inevitably made them cancel their trip and we lost the business.”

Without a direct link, Singapore and overseas clients are now “thinking twice” about selling Belitung, as domestic flights via Jakarta are more expensive and time consuming, he added.

“At this moment, the dream to make Belitung an international destination is broken,” Yudianto said. “Now we’re relying on AirAsia, said to launch flights from Kuala Lumpur in August. Hopefully the regional government will truly realise the cooperation with AirAsia.”

Airport capacity is another key challenge, Isyak pointed out, as the annual number of passengers has reached 800,000, outstripping H.A.S. Hanandjoeddin International Airport’s capacity of 250,000 passengers.

State-owned Angkasa Pura II has taken over the management of HAS Hanandjoeddin Airport to unveil a 400 billion rupiah (US$28.4 million) development plan beginning next year, which will see the addition of a new terminal that will accommodate three million passengers, an apron and a taxi way.

As well, Isyak is planning to form the Belitung Tourism Board to market the destination, as more new attractions and travel products come online.

Karmila said: “Belitung has 200 islands, and most of them have not been explored, so the tourism potential is still large.”

While Belitung is not lacking in attractions, Herry Sulistya, director of sales of Fairfield by Marriott Belitung, opined that tour operators are still offering standard island-hopping packages with some photo taking and snorkelling opportunities thrown in. “These kind of itineraries are only suitable for first timers with staying less than three days,” he said.

“Besides beaches and islands, they must think creatively to sell new attractions, such as combining nature and culture, so that packages are more varied and travellers are also not bored.”

Yudianto suggested that activities such as kayaking, diving and visiting turtle breeding spots can be combined with village tours for tourists to immerse and learn about the local culture, hence enhancing the overall Belitung experience.

“The government efforts to register the Belitung geopark (for UNESCO consideration) received good response from adventure tourists,” said Yudianto. “We also see a lot of scientists who are interested in coming to research the nature of Belitung.”