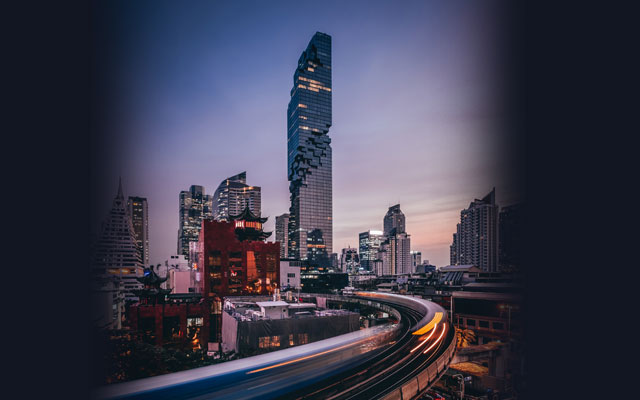 The Orient Express Hotel brand was unveiled by AccorHotels and King Power during a signing ceremony between the two companies yesterday at the recently opened Mahanakhon Skywalk, Thailand’s highest observation deck atop the 78-storey King Power Mahanakhon Building, and which will be accessible to hotel guests too.

Sebastien Bazin, chairman and CEO of AccorHotels, said in a statement: Orient Express has always acted as a passport between worlds… This linking of Occident and Orient, of history and modernity, and of curiosity and cultures will be a hallmark of the new Orient Express Hotels and we are excited to bring back this spirit of luxurious adventure to today’s modern travellers.”

At the signing ceremony, Aiyawatt Srivaddhanaprabha, CEO of King Power Group – son of late Vichai Srivaddhanaprabha – also dedicated the “multimillion” project to his father who passed away in recent helicopter crash at the King Power Stadium in Leicester.

The Orient Express Mahanakhon Bangkok will feature 154 rooms including nine suites and two penthouses, as well as an entire floor devoted to wellness including an outdoor pool and jacuzzi plus signature Orient Express Spa by Guerlain.

Designer Tristan Auer has been tasked with reimagining the Art Deco stylings and plant motifs of the original Orient Express carriages into the modern skyscraper hotel.

The hotel will feature two signature restaurants. Mott 32, on the second floor, will offer a contemporary Cantonese dining experience, and Mahanathi, on level five, will be helmed by chef David Thompson of the Nahm and Long Chim fame.

The Orient Express Hotels brand signifies Accor’s desire to “compete at the super luxury level”, said Patrick Basset, COO of AccorHotels for Upper Southeast & Northeast Asia and the Maldives. The French hospitality giant currently has 80 hotels in Thailand, with over a third in the luxury segment.

Basset said: “Even though Thailand saw some hiccups this year with some markets, but overall we’re confident of the long-term prospects of Bangkok, with tourist arrivals likely to hit 38 million this year and probably much more in the future.”

Issenberg expects the new Orient Express hotel in a landmark building to be a “destination” in itself and attract new visitors to Bangkok. “A whole package like this doesn’t exist elsewhere. Orient Express Mahanakhon Bangkok will be highly sought after,” he stated.

Bangkok, apart from the upcoming Orient Express hotel, has been the launchpad for several Accor brands like Pullman and So Sofitel, said Issenberg. “The (Bangkok) market is not as sophisticated but is open to new ideas,” he remarked.

AccorHotels and SNCF Group signed a strategic partnership in 2017 to develop Orient Express hotels after AccorHotels acquired a 50 per cent stake in the share capital of the brand. SNCF still retains ownership of the seven original Orient Express carriages.