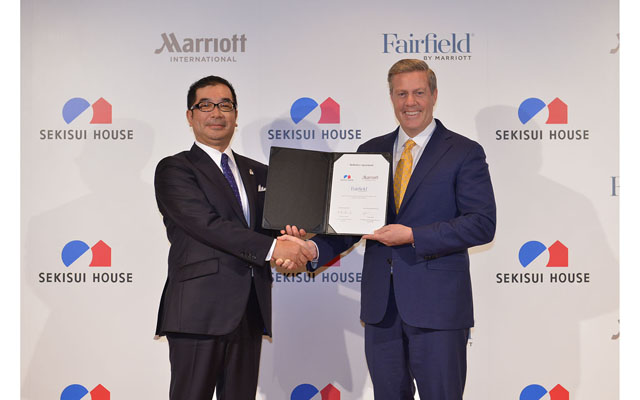 Marriott International has entered into a long-standing collaboration with Japanese real estate developer Sekisui House to open 12 Fairfield by Marriott hotels across five prefectures in Japan – Kyoto, Wakayama, Mie, Gifu and Tochigi – with an anticipated 15 hotels to be signed by next year.

All properties are expected to open by 2021, with the first dozen hotels scheduled to open in late 2020.

The partnership with Sekisui House will enable Marriott to tap the “growing trend” of more visitors to Japan exploring its lesser known destinations by offering travellers access to remote destinations through the new Fairfield by Marriott properties planned, according to Craig Smith, president & managing director, Asia-Pacific, Marriott International.

He said: “We see that, while there is increasing demand to explore destinations outside of the popular gateway cities, there is currently a limited amount of accommodations in these more remote areas.”

The upcoming Fairfield by Marriott hotels will be situated in convenient locations near popular roadside rest stations called “Michi-no-Eki”, which number more than 1,000 across Japan.

These newly-built standalone properties will offer between 49 to 96 rooms, and will be sited near key attractions in the five prefectures of Kyoto, Wakayama, Mie, Gifu and Tochigi.