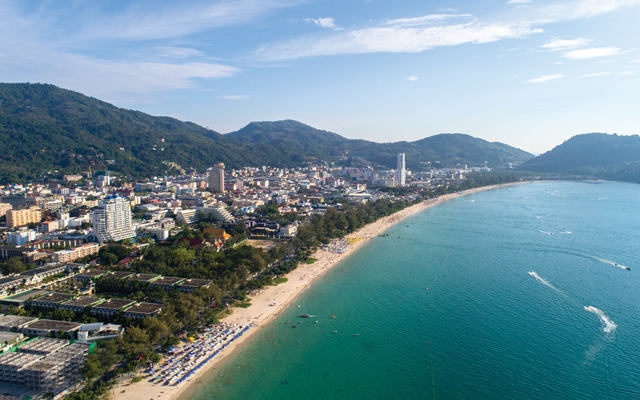 Phuket: Not purely beaches
Phuket has largely built its stature as a beach holiday island, but it is increasingly transforming into an urbanised holiday destination, shaped by the forces of growing airlift, surging visitor numbers and changing source markets.

“A definite shift in geographic markets over the past 10 years”, with China, Russia and Australia making up bigger market shares than before, has led to “rising demand for non-beach centric activities”, according to a recent report by C9 Hotelworks.

Michael Ayling, general manager of Blue Tree Phuket – a US$40 million water park and lagoon destination opening in early 2019 – thinks the attractions sector is still underserved in Phuket, as the island has comparatively fewer water parks than Pattaya and Hua Hin.

The arrival of more theme parks will enable Phuket to have a stronger year-round appeal, said Ayling, as the focus of tourist activities can turn inland during the monsoon months from May to October.

At the same time, the arrival of Middle Eastern airlines bringing more direct air connections to Phuket is already turning the island into a year-round destination, attracting not just the regional market but European visitors too.

Matthew Hindmarch, director of hotels and resorts, Aksara Collection, noted: “The Scandinavians are coming year-round now thanks to growing air connectivity. A traditional high season market like Denmark is starting to travel year-round.”

However, industry players warn of room oversupply in Phuket, which is already showing strains of overdevelopment, especially in Patong Beach.

“It’s getting difficult to sell Phuket,” said Richard Brouwer, CEO of Khiri Travel, as the deluge of hotel development and visitors have made Phuket into “a prime beach destination for the volume market”.

According to C9, Phuket has a total of 1,774 tourist accommodation establishments with 84,427 keys as of 1Q2018, including registered and unregistered properties.

Meanwhile, the popular holiday island sees no sign of abatement in its still-expanding hotel supply, including a Mandarin Oriental coming in 2022. – Xinyi Liang-Pholsena

Cebu: overtourism risk with growing popularity
More hotels and resorts will dot Cebu’s Mactan Island over the next several years, with investors and visitors lured by the destination’s growing popularity and better accessibility.

Already boasting the biggest cluster of upmarket hotels and resorts including a Shangri-La, Movenpick, Plantation Bay and Maribago, Cebu will soon welcome the 271-key Dusit Thani Mactan Cebu in 4Q2018, the 250-key Sheraton Mactan Resort in 2019, plus upmarket local hospitality brands like Aruga, Grafix, Ayala Land’s Seagrove in the pipeline.

With better airport infrastructure and an array of properties that other destinations lack, Cebu is now the top alternative destination in lieu of Boracay, which was closed for a six-month rehabilitation since April 26.

Indeed, Margie Munsayac, vice president – sales and marketing, Bluewater Resorts, confirmed that rooms in Mactan are difficult to secure at the moment in Mactan as it benefits from Boracay’s closure.

Jid Velasco, director of sales and marketing, Plantation Bay Resort and Spa in Mactan, shared that the there’s almost no distinction between the high and low seasons for the property due to the steady stream of guests year-round.

But with hotel and resort developments centred in Mactan’s Puerto Engano area, the destination’s “carrying capacity is becoming a real concern for the industry”, said Jojo Clemente, president of Tourism Congress of the Philippines, who also urged a study to address the possibility of overcapacity and overdevelopment in Mactan.

Clemente, who became an advocate for establishing the carrying capacity of tourist destinations in the Philippines following Boracay’s closure, opined that Mactan can still accommodate “a few more resorts” to maintain its current arrivals but certainly “not too much” to avoid strains on the island’s resources. – Rosa Ocampo

Iskandar Zulkarnain, director of sales and marketing at The Andaman, A Luxury Collection Resort, Langkawi, shared that the UNESCO Global Geopark status is what differentiates Langkawi from Bali’s culture and Phuket’s nightlife.

But connectivity remains a key challenge for this Malaysian beach destination, with international links limited to Singapore, and Guangzhou, Kunming and Guiyang in China.

LADA is also in talks with Germany’s Condor Air, which will commence services between Frankfurt and Kuala Lumpur from November.

To encourage airlines to test new routes to Langkawi, LADA is providing chartered flights with incentives.

Welcoming such initiatives on the authorities’ part, Anthony Wong, president of Langkawi Business Association as well as group managing director, Asian Overland Services Tourism & Hospitality Group, said: “For a destination with limited direct flights from foreign destinations, getting charters is a good start. It allows the airline to gauge whether there is a market for the destination and whether it will be viable to commence scheduled flights later.”

As part of its strategy to encourage foreign tourists to spend longer than the average duration of four days/three nights, Azizan said LADA is looking for investors to develop a premium outlet, a water theme park, and a private medical centre in Langkawi. – S Puvaneswary

Bintan: Luxury sheen growing
Bintan has long been a weekend getaway for city slickers from Singapore, but few would associate the Indonesian island as a real luxury destination because of a perceived lack of infrastructure to cater to the upper upscale market, and little by the way of a concerted and coordinated effort among its players to market it as one.

This is steadily changing as more high-end accommodation and facilities open on the island, their own marketing and promotions helping to lift the island’s high-end image to a global audience and, perhaps eventually, creating a critical mass needed to trumpet Bintan jointly and consistently as a glamorous getaway.

The presence of fresh company could be good news for Banyan Tree Holdings, the swashbuckler which led the way in the luxury market by opening Banyan Tree Bintan in 1994 in Lagoi, an area that boasts pristine coastline, tropical jungles and unspoiled natural landscapes.

Then came The Sanchaya, which entered Bintan in December 2014 and paved the way for a new era of uber luxury on the island as an exclusive beachfront estate featuring 29 villas and suites. Its four-bedroom Vanda Villa is said to be Bintan’s only US$10,000-a-night villa.

The question is, beyond more luxury accommodations, what is actually luxurious about Bintan?

Just as Banyan Tree Bintan peddled the idea of a world-class retreat when it opened – which obviously sells as the resort is still standing after 24 years – The Sanchaya’s estate manager Magnus Olovson too believes in “restorative” luxury.

Said Olovson: “New York has its Hamptons, Sydney the Blue Mountains and Rome its Naples (for weekend escapes)… In Singapore, Bintan has emerged as such a retreat, proving to be a major drawing card for the well heeled. Bintan is also an ideal go-to retreat for those wishing to temporarily escape bustling Jakarta.

Bintan Resorts International spokesperson Iris Kok also pointed out that the island has more than just luxury accommodation to cater to luxe travellers. Citing Treasure Bay Bintan as an example, she said: “Treasure Bay Bintan has gotten so much social media attention and is insta-famous for the appealing shade of blue of its 6.3ha Crystal Lagoon, South-east Asia’s first and largest recreational sea-water lagoon.”

The newest luxury kid on the block in Bintan is Cenizaro Hotels & Resorts, a Singapore-based group which owns The Sheraton Towers Singapore, and owns and operates its own upmarket hotel brand, The Residence, with properties in Tunisia, Mauritius, Zanzibar and Maldives.

Cenizaro shows its confidence in Bintan as an upmarket destination not only by fielding the latest Residence there, but in a greenfield site in the east of the island, far away from Lagoi which is in the north.

Andy Xie, executive director of The Residence Bintan, commented: “Bintan has grown a lot in terms of visibility with (government) initiatives such as the Batam-Bintan Crossborder (an event to develop the Singapore and Malaysian markets for Batam and Bintan) last year.

“We believe there will be many forthcoming initiatives that will further put Bintan on the map, which is why we have also chosen to open a property there.” – Mimi Hudoyo

Phu Quoc: a new star arises
Vietnam’s emerging island of Phu Quoc is welcoming a crop of luxury properties, attracting a new tier of traveller to its shores.

Phu Quoc has planted itself on the global tourist radar and is gearing up to be a major player in the country’s tourism stakes, welcoming an increasing number of visitors and development.

According to the latest figures from Vietnam National Administration of Tourism, in 2017 the island received nearly two million visitors, a 35 percent year-on-year increase. This figure is expected to rise, with Phu Quoc International Airport undergoing an upgrade to handle five million visitors annually by 2020 and seven million by 2030.

The latest wave in Phu Quoc’s rise has seen a swathe of luxury resorts land on the island, transforming it from a relatively unknown spot on the South-east Asia backpacker trail to a sought-after destination.

The opening of the 459-room Phu Quoc Long Beach Resort in June is among the latest of international brands launching on Phu Quoc.

In the luxury pipeline is BIM Group’s Regent Residences Phu Quoc, which will be the island’s first six-star resort when it opens in 2020.

“Once built, the developments will establish Phu Quoc as an international destination,” he said. “However, natural beach landscapes will be replaced with manicured beach landscapes belonging privately to resorts and dedicated to resort guests.”

She said: “The local community and stakeholders need to ensure Phu Quoc does not lose its traditional charm, clean environment, pristine beaches, and the friendly spirit of the locals.” – Marissa Carruthers

Developed by Desaru Development Holdings One, Desaru Coast is home to four hotels and resorts, two world-class golf courses, a themed water park, a retail village as well as a conference centre.

The Desaru Coast Conference Centre, due to open by end 3Q2018 and managed by The Westin Desaru Coast Resort, is a fully-equipped multipurpose venue with a banquet area and exhibition space that can host up to 1,000 participants.

Desaru Coast Adventure Waterpark, which opened in July, is also an anchor attraction, offering unique rides such as the first-ever water coaster in the region and one of the largest wave pools in the world.

She added: “While our primary focus is to attract holidaymakers, we are also mindful that Malaysia is growing to be one of the most preferred business events destinations for foreign delegates.

“Further, we believe Desaru Coast, with its integrated destination offerings, situated along a pristine 17km beachfront, is well placed to capture the growing “bleisure” market, benefiting from its unique mix of corporate and leisure facilities and strategic location,” said Arbak. – S Puvaneswary