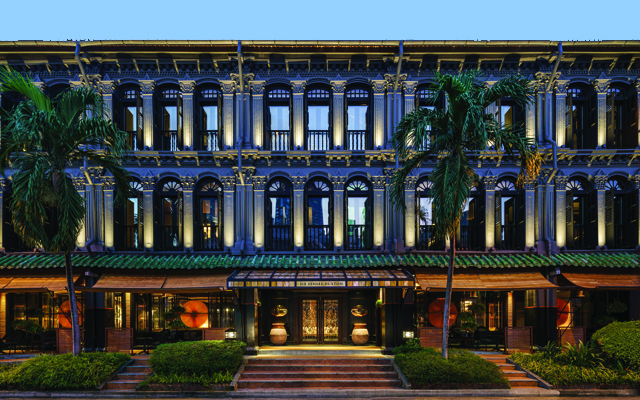 While swanky hospitality brands like Andaz are calling towering skyscrapers homes in Singapore, a crop of new hotels are finding love in the city’s older buildings, wooing travellers with a meld of history and modern comfort.

In 2017, The Lo & Behold Group set up camp in the old warehouses of Robertson Quay, originally built in 1895 for liquor distilleries and opium dens. Then in April this year, luxury resort brand Six Senses opened within a row of shophouses in the Tanjong Pagar district.

She explained that Cube caters to a new generation of guests that “(doesn’t) need a swimming pool or spa facilities on the premises” and are “price-sensitive”, but who also appreciate the immersive experience of staying in a heritage building.

“(Our guests) are identified as digital-savvy global explorers in the 18-35 age group,” Tay said.

Conserved heritage sites are hardly a novel setting for Singapore hotels. The Fullerton Hotel Singapore occupies a National Monument: the Fullerton Building, commissioned in 1919 as a part of the British colony’s centennial celebrations; Grand Park City Hall sits on a century-old conservation site; Link Hotel was converted from art-deco residential blocks from the 1950s and 1960s; and the iconic Raffles Hotel Singapore opened in 1887 with 10 rooms in an old bungalow-style building.

But this recent rush of new blood to the scene has reawakened the old dames, who have launched rejuvenation campaigns and technological innovations to remain competitive.

Link Hotel has reopened after a major renovation, and is now part of the Tiong Bahru Heritage Trail.

As part of its restoration, Raffles Hotel Singapore will introduce a new line-up of dining experiences by celebrity chefs such as BBR by Alain Ducasse; La Dame de Pic by three-Michelin-star chef Anne-Sophie Pic; and yì by Jereme Leung, a Singapore-born chef who was a judge on Masterchef China. This heritage icon is slated to reopen in 1Q2019.

Grand Park City Hall is also undergoing the final phase of its transformative masterplan – scheduled to complete soon – which will integrate it into an upcoming mixed-use lifestyle precinct, City Hall Square. It will be the first hotel in Singapore to launch mobile check-in facial recognition technology, reducing check-in time from five minutes to a minute.

Meanwhile, The Fullerton Hotel has taken its 90th anniversary this year to introduce year-round events and promotions. These include the inaugural Fullerton Concours d’Elegance showcase of more than 90 vintage and classic cars; and a series of theatrical drama tours that retell the history of the national monument.

Cavaliere Giovanni Viterale, the hotel’s general manager, said: “I believe there is an air of romance and mystique that surrounds Singapore’s heritage buildings, especially one like the Fullerton Building. Beyond the aesthetic appeal of heritage building, each stay is enhanced by authentic stories and experiences that are hard to replicate.”