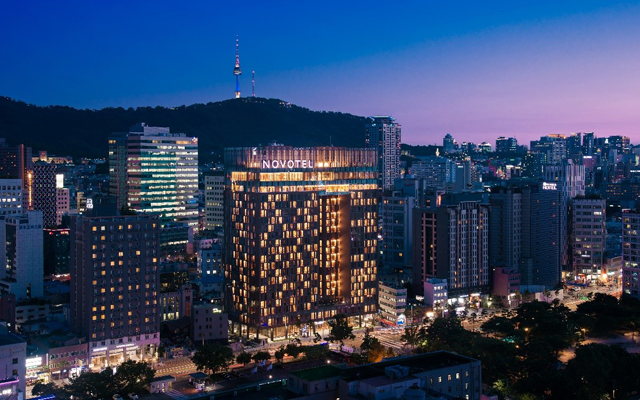 Improving international relations and exposure gained from global events have spurred a burgeoning hospitality scene in Seoul and provinces beyond. In the capital city alone, 15 hotels with 4,451 rooms will be expected to open from this year to 2020.

The four-brand “hotel-plex” allows each hotel to tap on the facilities and services of the others, said Hwang. AccorHotels has since opened Novotel Ambassador Seoul Dongdaemun in July.

This year, Marriott International has four new projects in Seoul and Busan. Hotels are also debuting in secondary locations, such as the Gangwon province where the Pyeongchang Winter Olympics were held earlier this year.

For Wyndham Hotel Group, there are seven hotels just opened or in the pipeline across the country. Besides two Ramada properties in Seoul, the group is setting up camp in other areas such as Cheonan, Cheongju and Incheon Airport, raising its total South Korea portfolio to 36.

“There is huge demand for South Korea, especially by tourists from Mainland China, Malaysia, Singapore and Taiwan. We have seen a dramatic increase in Chinese tourists in our Seoul properties; for example, Ramada Seoul Dongdaemun has seen an average occupancy of 85 to 90 per cent,” said Michael Kim, director franchise operations, South Korea, Wyndham Hotel Asia Pacific.

He added: “Sokcho and the whole of Gangwon have received huge benefits from the Olympic Games. Ramada Sokcho saw 100 per cent occupancy during the Olympic Games, and now sees an average of more than 80 or 90 per cent. Tourism is booming in the Gangneung area too, so we have opened properties in line with this, such as in Chuncheon.”

As the hotel scene heats up, players are also stepping up to develop luxury offerings in South Korea. For example, Hyatt will bring boutique brand Andaz to Gangnam in 2019, and AccorHotels has announced plans to open the 326-room luxury property Fairmont Ambassador Seoul in 2020.

Morten Andersen, general manager, Signiel Seoul, said: “A lot of Russian and Middle-Eastern clientele come for shopping and medical treatments. South Korea is getting very popular (in these markets), and we are also seeing visitors from China and Japan. With the Michelin Guide now in its second year, a lot of gourmands are coming, especially wealthy Europeans.”

Andersen noted that his hotel’s guests are slightly more conservative in exploring South Korea, largely remaining in Seoul for three nights and at most venturing to Jeju or Busan.

When asked about standing apart from competition, president & general manager of Grand Ambassador Seoul associated with Pullman, Bruce Lee, shared that the hotel has developed a Namsan Trekking Package that “has been a steady seller for over five years”, as well as transformed all 25 guestrooms on the 16th floor into Internet of Things Smart Rooms. This allows guests to control functions from lighting to room temperature on their own smart phones.

Lee stated: “To attract more luxury guests, Korean hotels need to enhance personalised service and authentic Korean experiences. One of the best ways to approach guests (in a personal way) is with recognition, which can lead to casual talks (where) the hotel staff can learn what guests want.

“Also, authentic Korean experiences need to be developed. For instance, when Korean War veterans visited the hotel, our hotel’s concierge associates wore Korean traditional gatekeeper’s attire to welcome them. This kind of service can guests give extraordinary experiences to attract more to Korea.”

To complement the trade’s movements into the luxury market, the Korea Tourism Organization (KTO) released an updated version of its luxury travel guide, which now features an expanded list of products such as traditional craft experiences and Michelin-star restaurants.

Yoon Seung Hwan, director of KTO’s Singapore office, noted that the destination’s mass market image has posed a challenge in pursuing the luxury segment, but it can be surmounted by intensified marketing efforts and potential special interest tours involving North-South diplomacy.