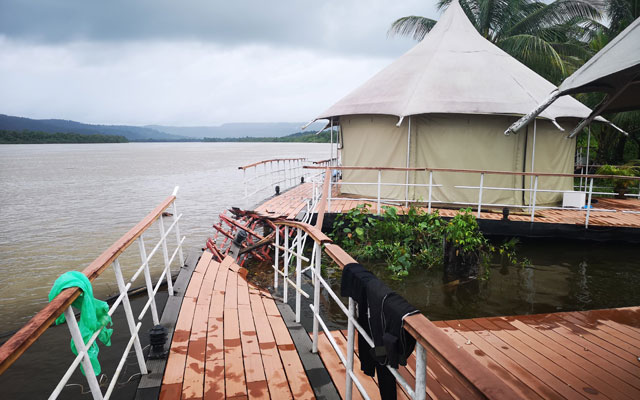 Work is set to start on rebuilding an iconic floating resort in Cambodia that was recently devastated by heavy monsoon rains.

4 Rivers Floating Lodge – a luxury floating resort on Tatai River in Koh Kong province – was damaged last month when unusually heavy monsoon rains combined with excess water released from a nearby dam washed it away.

Rising water levels of more than 1.5m caused currents to rip through the resort, with parts of the hotel, along with 40 staff, adults and children, carried eight kilometres downstream on drifting platforms.

No one was reported injured and initial assessments put the damage at several hundreds of thousands of US dollars. All of the resort’s floating platforms including 12 tents were torn, and water and electricity systems completely damaged.

Managing partner Valentin Pawlik said reconstruction work will start this week, with six units expected to reopen on November 1. The new resort will be redesigned to cope with excess flooding.

Pawlik, who built the original structure, said: “When we built the resort nine years ago, there wasn’t this much rainfall and we didn’t think there was this much potential for flooding.”

Stefan Scheerer, general manager of Khiri Travel Laos, said the disaster has not impacted the tourism industry, describing the region as “a sleeping beauty in the south” and not yet a well-known tourism destination.