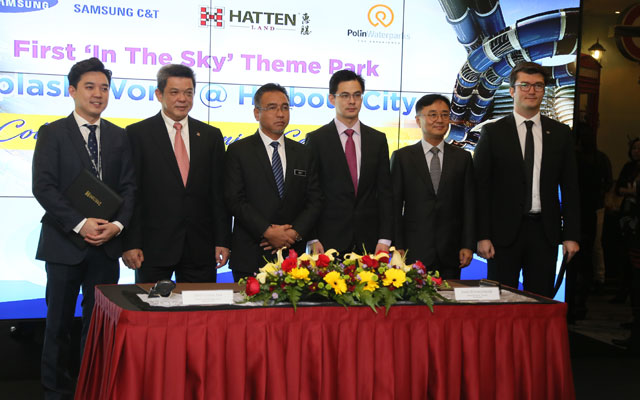 A collaboration between Singapore’s Hatten Land, Samsung C&T Corporation – which also operates South Korea’s Everland Resort – and water slides designer Polin Waterparks, Splash World @ Harbour City is due for completion by end-2019 and expected to be opened to the public in 1H2020.

The partners said in a joint statement that the water park, located 14 floors above ground, will be “the world’s first ‘sky’ theme park”. Nestled between two 30-storey towers on the 14th floor deck of Harbour City @ Melaka, a mixed development shaped like a ship, the four-storey park will offer indoor and outdoor areas and more than one kilometre of water slides.

A man-made river will meander over two floors to intertwine more than 50 attractions, including 11 extreme slides for thrill-seekers, a Sky Beach and a dedicated children’s water play park. After dark, the Cosmic Waters light show will illuminate the park, accompanied by a water circus, trapeze stunts and other entertainment in an amphitheatre.