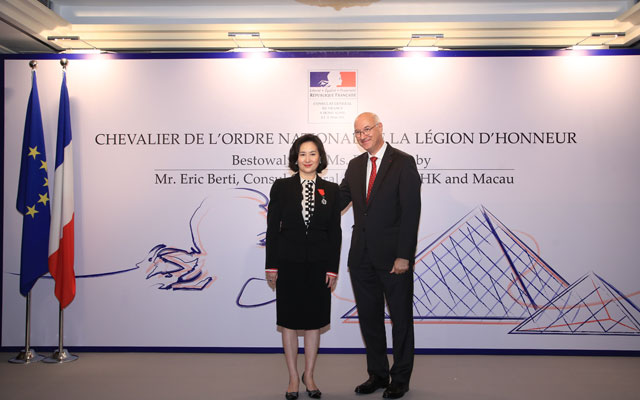 Apart from her involvement in organising Le French May, the avid patron of art and culture also brought prominent French art exhibitions like Biennial of the Lions, Edgar Degas: Figures in Motion and A Golden Way of Life – Très’Ors to Macau to make French art and culture more accessible to the Hong Kong and Macau communities.

Since her appointment as Ambassador of the Louvre in China in 2012, Ho has been championing French art and culture and advocating French-Chinese trade and tourism. She founded the France Macau Chamber of Commerce in 2008 to network businesses across Macau, Hong Kong and France.

The Global Tourism Economy Forum (GTEF), an initiative proposed she proposed, was inaugurated in 2012 as an annual tourism event. Showcasing France as a Partner Country of GTEF 2016, she helped to foster French-Chinese public-private tourism cooperation and exchange, create tourism promotion, investment and cooperation opportunities for tourism stakeholders.

In April 2009, Ho was previously bestowed the honour of Chevalier de l’Ordre National du Merite in recognition of her commitment to diversity.

The Order of the Légion d’Honneur was created by Napoleon Bonaparte in 1802. It is the highest civilian award given by the French Republic for outstanding service to France.