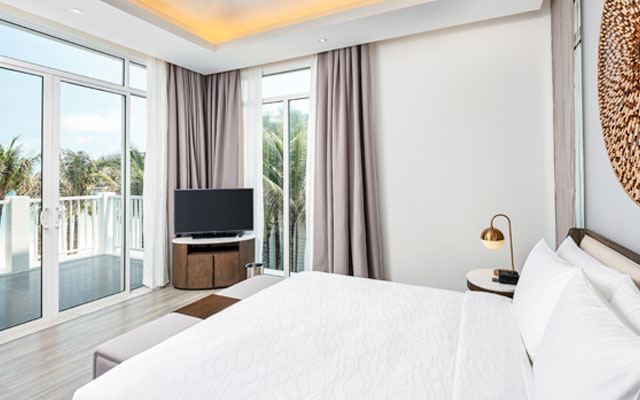 F&B options include the Mediterranean restaurant Corallo, the all-day dining Market and the Sunset Lounge (opening in late 2018). Leisure facilities include the Plumeria Spa, a fitness centre, communal swimming pool, kids’ club, as well as a Bill Bensley-designed elevated platform function space that can cater to 200 pax (also opens late 2018). RYSE, South Korea
The second Autograph Collection hotel in Seoul has risen in the Hongdae district. RYSE boasts 272 guestrooms including 14 suites, each designed to highlight an art piece from an exclusive collection for the hotel. For instance, the 217m2  Executive Producer Suite, located on the 20th floor, features handpicked artworks and a graphic wall by renowned Korean graphic designer Na Kim. Aside from the four F&B options, facilities on the property include a fitness centre, 500m2  retail store, and 1,400m2  of meeting and event spaces.

The property also has four F&B venues, a spa with six rooms, 24-hour gym, indoor swimming pool, steam room, sauna and whirlpool. Event planners may avail the more than 1,670m2  of indoor function space, which includes the pillarless Regency Ballroom for up to 1,000 guests, and six meeting rooms. Complementing the indoor spaces is a 4,600m2  outdoor garden. Peppers Silo, Australia
Launceston in Tasmania, Australia, has welcomed a new hotel Peppers Silo, the first such development in the city since 2010. The redeveloped site – from unused grain silos in Kings Wharf – along River Tamar is now a 10-storey hotel featuring 108 guestrooms, including 52 inside the barrels of the former silos, which includes one- and two-bedroom apartments.

Amenities at Peppers Silo includes a fully-equipped gym, day spa, child-minding facilities, hairdressing salon, and a restaurant and bar called Grain of the Silos. There are also conference facilities for up to 500 people, as well as private dining rooms available.