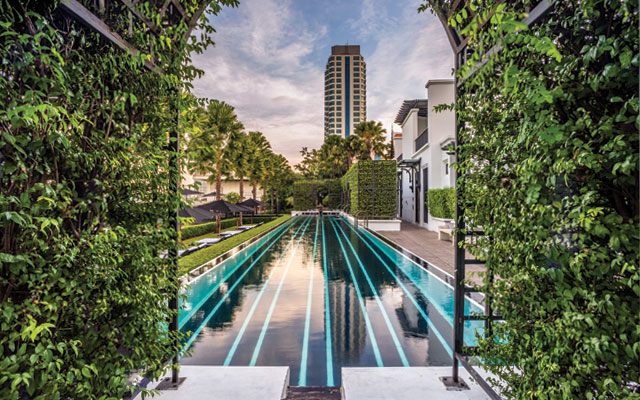 In Asia, where cities are often characterised by high-rises and a dense population, resort-like hotels offer a convenient option for locals and foreign visitors alike a respite from the urban bustle. Urban resorts also play well to the growing bleisure trend, as modern travellers are combining work and leisure more than ever.

“Urban resorts sell well to those who visit the city and don’t have time to travel to a beach destination or a jungle resort. It does well with honeymooners, couples, business travellers and expatriates looking for a restful weekend,” Ally Bhoonee, executive director, World Avenues, told TTG Asia.

“Customers, especially families, love urban resorts as it makes them feel they are on holiday and at ease. The rustic décor, water elements, landscaping and interior design creates that atmosphere. At the same time, they are not too far away from the city,” he added.

Among foreign visitors to Asian cities, the European market shows a stronger preference for resort-type properties.  “It is a trend for Europeans on holiday to get away from concrete blocks. They enjoy staying in smaller boutique properties that can offer a more relaxed environment such as Villa Samadhi Kuala Lumpur,” said Manfred Kurz, managing director, Diethelm Travel Malaysia.

Sharing Kruz’s observation, Kim Martin Rasmussen, product & contracting manager at Exo Travel Thailand, also sees  the Western market placing a higher premium on resort stays in Bangkok. “The UK market especially likes Ariyasom Villa and Anantara Riverside, whereas all our French clients like this kind of resort-style (hotels), as they are not used to high-rise buildings in France, so they always like it small and boutique.”

In the city, but an escape from it
Prime examples of urban resorts, in the eyes of travel agents in the region, are the Aman Tokyo, Kerry Hong Kong, and The Siam in Bangkok.

A shared feature is the strong sense of retreat, and despite their urban setting flaunt a connection to nature, may it be in the ample indoor/outdoor spaces, extensive natural light or abundant greenery. These urban sanctuaries are also destinations unto themselves, combining unique design with a strong suite of health and wellness amenities.

Gloria Slethaug, managing director, Connexus Travel Hong Kong, remarked: “There is a limited number of hotels in Hong Kong that are considered as urban resorts. In fact, urban resorts can be thematic, e.g. The Landmark Mandarin Oriental Landmark, with its Oriental Spa concept, or Kerry Hotel, with an outdoor infinity pool.”

She added: “However, some clients may not consider a city hotel with a large outdoor pool as a resort. In my view, an urban resort is about providing an oasis from the hustle and bustle of a cosmopolitan city. The PuLi Hotel and Spa in Shanghai is a great example of an urban oasis, as are Aman hotels, which have the capability to create such ambience.”

In Bangkok, Ariyasom Villa and The Siam are urban resort standouts in the eyes of Soontarut Wattanahongsiri, founder of Blackrice Travel.

“Their architectural style, ambience, facilities and most importantly personalised service make (clients) feel more relaxed amidst Bangkok’s chaos. They don’t make guests feel like they’re in Bangkok,” she said. “These two properties are both my personal favourites as well.”

For Exo’s Rasmussen, other urban resort contenders in Bangkok include heritage properties like Chakrabongse Villa, which combines history and outstanding design by the riverside; Anantara Riverside, a riverside property in a resort-style setting; and The Sukhothai Bangkok and Siam Kempinski, both retreats from their surrounding bustle in the city’s downtown.

Still room to grow
Unlike other Asian cities, Manila, on the other hand, has few properties that can be considered urban resorts, according to Philippine agents Benjie Bernal, tour operations manager at Sharp Travel Service and Mike Hain, groups manager at Corporate International Travel and Tours.

Sofitel Philippine Plaza Manila, according to both, is the closest to what an urban resort is, but the luxury property enjoys greater popularity among local staycationers than international visitors, in part due to Manila’s transit hub status as inbound visitors rather head elsewhere in the country for resort stays.

Even for a highly urbanised market like Hong Kong, where the likes of Kerry Hotel and East Hong Kong make compelling urban retreats, most clients are still not aware of such offerings in the city and would head to neighbouring Macau for weekend resort stays, shared TLX Travel’s director and general manager Eliza Ma.

There is room to grow the awareness for urban resorts as staycation venues when Hong Kong Ocean Park Marriott Hotel launches in June, she admitted.

It’s a similar story for Japanese travellers, observed Shota Shinura, president and CEO of Tokyo-based Benefit Plus, who said the Kerry’s and Aman’s appear to have developed a firm following among other nationalities except the Japanese.

“If Japanese want a city holiday, they go to Bangkok or Taipei or wherever for that destination; if they want a beach, they go to Hawaii or Bali,” he explained.