Singapore Rugby Sevens is firmly tackling new frontiers to grow the sport – and event– in Asia, by striking a balance between being fun and family-friendly to set itself apart from competitors, discovers Pamela Chow 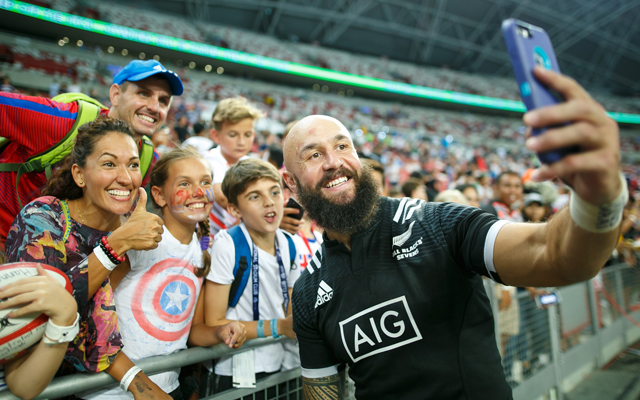 In its third edition this year, the two-day HSBC Singapore Rugby Sevens has become a staple in the country’s sports events calendar. As the eighth of the World Rugby Sevens’ 10 legs, this year’s tournament will take place on April 28-29 at the 55,000-capacity Singapore National Stadium.

Supported by the Singapore Tourism Board (STB) and government agency Sport Singapore, the two-day event lines up 45 matches between 16 rugby teams, with fringe festivities and parties organised at Clarke Quay, and around the Singapore Sports Hub.

Tale of two cities
As the Singapore Rugby Sevens grows in prominence, comparisons to its sell-out counterpart in Hong Kong – the tournament’s flagship that started way back in 1976 – have inevitably surfaced.

“It’s still early days for the Singapore Sevens,” said Darren Tan, managing director of World Express Singapore. “There were a lot of good vibes at the (Singapore) games, but it’s not at the level of Hong Kong’s yet.”

Angela Ng, managing director of Blue Sky Travel in Hong Kong, thinks that the Singapore leg can’t compete with its Hong Kong counterpart yet “given the rapport Hong Kong has built for years” in organising the event. “It takes years to nurture an international event,” she added.

Some agents express uncertainty about the sport’s draw in Asia. Tan observed: “(Rugby) has a strong but specific following. I was there to watch (the Singapore Sevens) last year and the followers were largely expatriates in the region. It’s good for the destination, but it’s a very special and niche market that’s very fan-based.”

BeMyGuest’ chief commercial officer Graham Hills thinks that fans who “only commit to one event per year will likely select Hong Kong due to its profile and popularity”.

But as the game spreads its wings in the region, proponents see the two Asian Sevens being complementary to each other, bringing opportunities for both tournaments.

David Lim, chairman of Rugby Singapore, noted that there has been a “rise in popularity” for rugby in Asia, particularly driven by Japan’s recent victories in the sport as the country prepares to host Asia’s first Rugby World Cup in 2019 and the 2020 Summer Olympics.

“It’s been great to have the Singapore Sevens return to the HSBC World Rugby Sevens Series – if we are going to push the growth of rugby in Asia we need to build the number of international marquee events that are hosted here,” he opined.

Jean Ng, director, sports, STB, told TTG Asia that as the only South-east Asian host in the World Rugby Sevens Series, Singapore aims to “draw more visitors from our proximity markets such as Malaysia and Indonesia”.

“We see the Singapore Sevens as one of the tentpole events that can bring fans and people from around the world to Singapore. We are currently in talks with agents, family-friendly attractions and retail options for partnerships.”

A family-friendly sport
As a young event, the trade is hopeful that Singapore Sevens can carve its own identity with its own selling point, making it equal parts festive and sporting.

BeMyGuest’s Hills suggested: “Rather than compete against Hong Kong, it’s more effective (for Singapore Sevens) to create a unique-to-Singapore aspect to help differentiate and create its own tradition. Growing the event to create more of a festival atmosphere… helps to create a true family affair and increase its popularity.”

For this year’s edition, Singapore Sevens is pushing beyond its sporting roots to become more family-friendly. It will feature the Singapore Rugby Carnival, offering activities such as face painting, themed challenges, inflatable stations and photo booths, in addition to local bands and food.

Lim explained: “We want that diverse variety of activities – not just sports – that will engage and bring people here. This is something we want to use to distinguish ourselves from every other stop in the World Series.”

For example, the event aims to “incorporate a very strong element of food around the precinct of the stadium”, as well as cultures of the 16 nations participating in the tournament, said Lim, so that the Singapore Sevens can offer attractions for travellers and non-rugby fans too.

“We see the Singapore Sevens as one of the tentpole events that can bring fans and people from around the world to Singapore. We are currently in talks with agents, family-friendly attractions and retail options for partnerships,” he shared.

Rugby Singapore has stepped up partnership talks with attractions and travel agents in Singapore and around the region. Last year, 200 tickets were sold through travel agents; this year’s goal is set between 500 and 1,000.

What’s needed now, say agents, is increased collaboration with the organiser. General manager of Diethelm Travel, Judy Lum, suggested: “The organiser should consider having a dialogue with the local DMCs… to promote (the event) to overseas tour operators.”

Already, the event is poised to raise tourism numbers between Singapore and Fiji, which is the current Olympic Champions in Rugby Sevens.

“In 2017, Fiji Airways brought in hundreds of Fijian rugby fans who travelled all the way to Singapore to watch the Singapore Sevens,” said Shaenaz Voss, the airline’s executive general manager, international and government affairs. “We expect numbers to continuously increase year on year.” – additional reporting from Prudence Lui