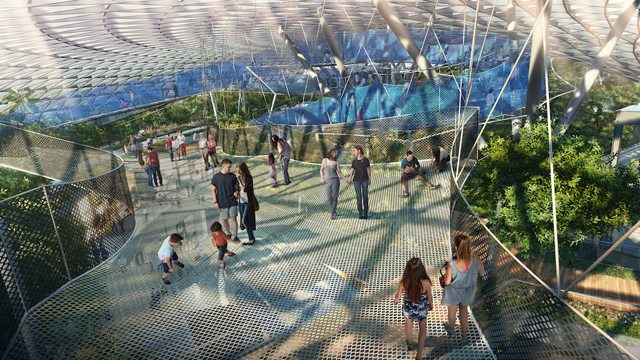 CEO of Jewel Changi Airport Development, Hung Jean, shared that Jewel hopes to attract transit passengers – which make up 30 per cent of Changi Airport’s traffic – as well as travellers from various FlyFerry, FlyCruise and CoachFly trips. She revealed that Jewel will also provide early check-in services for passengers across all carriers and terminals, including for airlines whose counters have not yet opened for check-in.

“Jewel is meant to elevate the tourism mindshare that (Changi Airport is) getting internationally,” Hung said. “If you have a longer transit, there’s so much more to do at Jewel.”

The main draw will be the Canopy Park’s three main play areas, open to visitors of all ages. The Sky Nets will consist of a 50m-long walking net suspended at 25m and a 250m-long bouncing net at eight metres above ground.

They are respectively designed by European consultants Officium and Chien Noir, both known for their net and rope installations around the world. The opposite end will feature a sprawl of two Canopy Mazes created by international maze designer Adrian Fisher. The first will be Singapore’s largest hedge maze with 1.8m-high hedges, changeable paths and a lookout tower; the second is an outdoor mirror maze complete with an infinity chamber.

Finally, Singapore consultancy Playpoint is collaborating with Dutch design company Carve to create the Discovery Slides, a massive art sculpture that doubles up as four play slides. This structure will also provide a 6.5m-high observatory deck for visitors to enjoy views over the rest of Jewel.

Other features that were also announced include four Foggy Bowls for young children to play in mist and a 50m-long glass-floored Canopy Bridge suspended 23m above ground.

The Canopy Park will also have a communal Canopy Plaza of F&B offerings that can be converted to host events for up to 1,000 attendees.