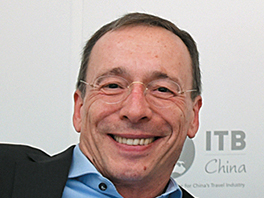 Messe Berlin is keeping modest about the future growth of ITB China even though the inaugural show this year sold out ahead of the event and early feedback shows some exhibitors want to expand their presence next year.

Interviewed by TTG Asia yesterday on how big ITB China could be next year, Messe Berlin’s senior vice president-travel & logistics, Martin Buck, said: “Based on demand, we can be hopeful.” ITB China this year fields 600 exhibitors from nearly 70 countries, occupying 12,000m2 of space, meeting around 600 hosted Chinese buyers and another 100 international buyers who make their own way here, beating other more established shows in China on the first salvo.

But Buck is keeping jubilation levels down, saying that the industry is more vulnerable than ever to geopolitics, safety & security issues, and huge changes, all of which have made it “difficult to forecast growth, even though we are optimistic”.

He pointed out how consolidation in the hotel industry, for example, could impact tradeshows. “Before you have two or three exhibitors. With consolidation, it’s not likely you will have three stands,” he said.

Added Buck: “(Before) we had only isolated incidents, say, the tsunami, one (incident) over 12 months. Now, there is a dramatic increase in frequency of incidents, be it geopolitical or terrorism, where certain destinations which are in could be out of the picture easily. The world is changing and we have to stay flexible and cautious about capacity and space. One never knows.”

He said he wasn’t surprised ITB China sold out ahead of the event. “We saw that the Chinese market has incredible potential but the shows available in China left room for improvement, especially when it comes to getting professional buyers and the right composition (tour operators, meeting planners, etc).”

He attributed ITB China’s success on this to “a certain proficiency” in the region that Messe Berlin has gained from launching ITB Asia in Singapore, and having the right partners who are well-connected to the market, like Travel Daily China.

When asked how ITB China might strengthen ITB Asia and ITB Berlin, he said for many Chinese, ITB China is the “gateway” to the ITB brand and that they could be participating in Berlin and Singapore too now that they have had seen the quality for themselves.

On launching more ITB spin-offs, possibly ITB India, Buck said: “I believe India’s potential should never be underrated. We have been trying for some time but it is difficult to find the right partners.”