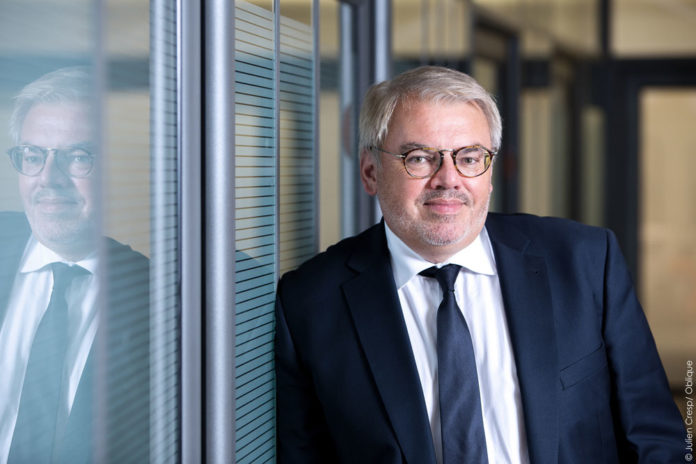 What does the new ownership mean for Louvre Hotels Group?
It’s a big change. Before, the owner was Starwood Capital. As with all funds, it’s natural that the investments are short-term, they want to increase the value and exit. Jin Jiang is a strategic, long-term player. It does not want to exit but to keep and improve the quality of the product. For example, we put a lot of money in renovations in the last two years to improve the products and make each of our brands interesting. Were you not able to do that before?
No, we didn’t have the financing. When Jin Jiang came on board, it gave me a credit line to not only invest in existing properties but to acquire hotels. The chairman asked me to do a strategic plan. I did it seriously even though I did wonder if it was just for fun or he was just testing me. I was surprised when he approved my plan and gave me the green light to follow it through immediately.

What’s the plan?
It’s called Plan to Win. To quickly increase the number of hotels in the big European countries through organic development and small acquisitions. That’s what we did in Poland, Germany and India (Sarovar Hotels). It’s for strategic reasons.

How are Poland, Germany and India strategic?
Let’s take Germany. We want to have a strong presence in the three big European markets, the UK, France and Germany. We are are strong in France – number two with more than 850 hotels. We focused on Germany first as acquisitions are harder in a more mature market like the UK, plus Brexit has created some uncertainties. India is strategic as the Chinese government aims to create infrastructure along the Silk Road belt.

Why did Jin Jiang buy Louvre?
We already had a relationship. I was looking for innovative ways to grow Louvre and was interested in the Chinese market but in China, you have the big local players.
In 2012, I decided to do a partnership and talked to many local players. Finally in 2013 we started a partnership with Jin Jiang, something that’s simple, easy-going. We chose 15 hotels in Paris and 15 in Shanghai. Chinese visitors who came to our hotels had everything in Mandarin – TV, newspapers, signages – and we changed the food to soup, congee, etc. We were also famous for providing Chinese guests with a hotline they could call when they were not in the hotel, then someone would translate for them if they were lost or needed something. French guests who stayed in Shanghai would get French newspapers, French TV channels, Bordeaux wines, croissants at breakfast.
Step by step, our relationship grew and in 2014, we even shared the same booth at ITB Berlin. We even crossed jobs between the two companies.
My wife is Chinese and I could speak a bit of Cantonese and Mandarin, so I guess they perceive me as someone who understands their culture.
They know how we work, they think we are professional – the fact that we have lots of success everywhere in the world from Indonesia to India which all have different cultures, currencies, IT systems, etc.  They can see we have the expertise and can adapt the product to the market.
So it started from just a small idea, but it changed my life.

So you aren’t worried that new ownership may change things?
No, we are lucky that Jin Jiang respects our DNA. They said manage the company as before and if you need help, we will help you. Now they’ve asked me to manage Jin Jiang in China and we’ve created a new entity for this, Jin Jiang Louvre Asia, to grow the brands in China and Asia (http://bit.ly/2oIXtyf).

Are you planning to buy more hotel companies after Sarovar?
Some small platforms perhaps but for now, the main message is integration, getting synergies from our acquisitions, so that we’re ready for the next cycle. There is enough to do already.
I think too that we will have to rationalise the brands a bit and have fewer brands. If you rationalise, you save costs. It costs a lot to market on the web, or if you work with OTAs and have so many brands you lose SEO (search engine optimisation).
It’s not the number of brands but brand differentiation. You could have as many brands if each brings something really special, a brand for women, millennials, cats, whatever it may be.

What are your current thoughts on industry consolidation?
There are only two big OTAs, Priceline and Expedia. In front of them are a lot of hospitality groups. Now you have two hotel giants against lots of small companies but even the biggest, Marriott International, covers only seven per cent of total hotels worldwide. So that’s why we’ve seen the consolidations in the past couple of years – Marriott with Starwood, Accor with Fairmont, Jin Jiang with Plateno – because you need to be a bit bigger to face the digital competition like OTAs and Airbnb. You have no choice. You could be very small or very big. In the middle, you lose. We choose to be big.
(Jin Jiang Louvre Asia has a portfolio of 2,500 hotels in 52 countries. It comprises a range of hotels from one to five stars. The brands from Louvre are Première Classe, Kyriad, Campanile, Tulip Inn, Golden Tulip, Royal Tulip and brands Sarovar Hotels which it acquired recently. The four Chinese brands from Jin Jiang are Metropolo, Jin Jiang Inn, Bestay and Goldmet Inn. The plan is to open more than 1,200 new hotels in Asia within the next three years.)

Will the whole company be called Jin Jiang Louvre one day?
Let’s take it step by step and keep it simple. We have quite enough to do as it is.