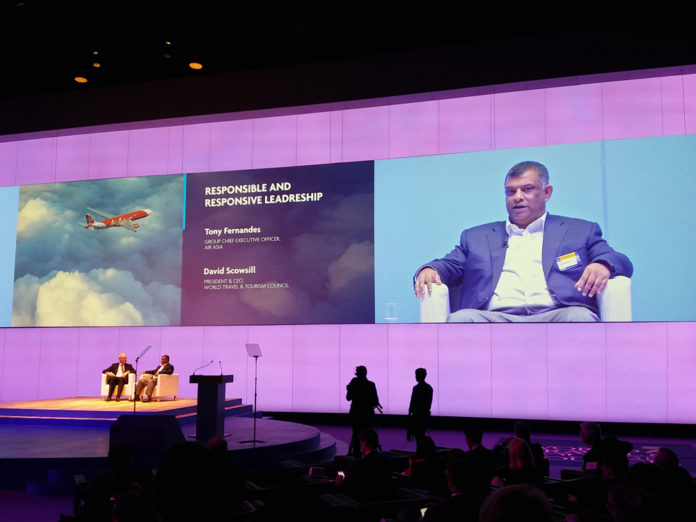 Stabilising fuel prices and a new generation of fuel-efficient aircraft models may bring some relief to airline operators in the current aviation landscape, but AirAsia Group CEO Tony Fernandes believes that legacy carriers will encounter greater challenges in their business models as they seek to cut costs in the face of fierce low-cost competition.

Speaking at the recent WTTC Global Summit in Bangkok, Fernandes shared his prediction: “In time you’re going to have two different airline models – LCCs will do the economic class and full-service carriers doing the premium sectors.” The presence of four classes – first, business, premium economy and economy – among some airlines is deemed “very inefficient” in Fernandes’ eyes. “One Singapore Airlines seat will be equal to 40 of mine,” he quipped. “We are more fuel-efficient and eco-friendly than any airline out there because we carry more passengers per foot.”

Fernandes also expects the arrival of a new generation of fuel-efficent aircraft the likes of Boeing 787 Dreamliner and Airbus A330neo will help LCCs to optimise their routes and network performance and push the envelop of more longhaul, low-cost models.

Commenting on Norwegian’s plans to launch budget flights on the London Gatwick-Singapore route, Fernandes said: “We are jealous of Norwegian; they have the right aircraft (Boeing 787-9 Dreamliner)… We want to go to Europe, but the Ukraine incident put an extra hour on our aircraft.”

He also doesn’t rule out the possibility of resuming services to Europe or flying farther afield to the west coast of North America on AirAsia X. The longhaul budget carrier last flew to Paris (Orly) and London (Gatwick) in 2012, and recently announced the launch of services to Honululu in 2018.

However, London may not be on AirAsia X’s radar when it returns to Europe. “There are many interesting points in Europe, so it may not be a hub airport like London. It may be Manchester or Dublin,” Fernandes said.

When asked where aviation is heading, Fernandes sees tremendous opportunities for airlines to keep costs down especially in their use of data. “Data excites me tremendously. The data explosion will decrease costs and increase revenue… I hope governments will use data to improve security and make travelling easier.”