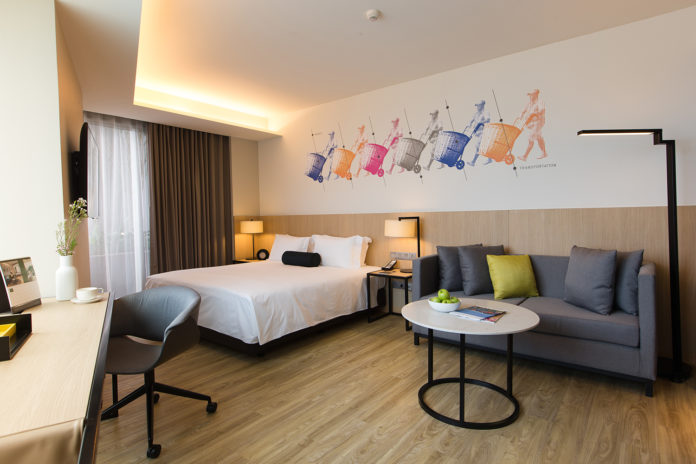 Modena by Fraser Bangkok
Frasers Hospitality has opened its first Modena by Fraser serviced residence outside China, with the launch of Modena by Fraser Bangkok in the FYI Center mixed-use development. The glass-clad property houses 239 units that are a mix of superior rooms, deluxe rooms and studios. It also offers complimentary high-speed internet access, a 24-hour gym, steam and sauna facilities, self-service launderette and meeting and conference venues. The property is located directly opposite the Stock Exchange of Thailand, with links to the Queen Sirikit MRT subway station, National Convention Centre and Benjakiti Park. Regent Chongqing
Regent Chongqing is set to open in December, featuring 181 rooms boasting an average size of 57m2 and 21 suites averaging 182m2 each, with most rooms offering river views. The hotel has 1,800m2 of event space, including six versatile function rooms and the 805m2Regent Ballroom. Guests also have access to a fully-equipped gym, spa with sauna, Jacuzzi, an indoor heated swimming pool, three restaurants and two bars. Regent Chongqing is situated in the financial district Jiangbeizui and it is set between the confluence of the Yangtze and Jialing rivers. It is a 30-minute drive from the Chongqing Jiangbei International Airport and 10-minute drive to Jiefanbei or Guanyinqiao centre.