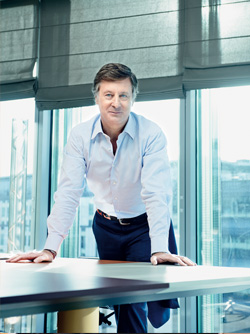 Sébastien Bazin, chairman & CEO of AccorHotels and TTG Travel Personality of the Year 2016, tells Raini Hamdi how critical it is for the industry to get its act together and participate in the new economy How far are you in changing the culture at Accor to fit current challenges?
If you compare Accor today with Accor 40 years ago, it’s been a 180-degree change. There’s a new way of thinking: more flexible, less dogmatic, more open-minded and there is a greater acceptance of risk.

But compared with where I want to go, I am still at number three out of 10 rungs on the ladder. Why? Because I believe the world is changing so fast that whatever we do today is not good enough.

It is my role to push people to take risks. We live in a world of recommendations. Whenever there is a new concept, people write about it and guests know about it. So guests want more and more surprises from the hospitality sector. And there is no reason a group of my size can’t be as inspired as any citizenM of the world. It’s not because we are heavy and big that we can’t think the same way.

But that’s the perception…
I know, I hate perceptions so I’m going to prove that it’s a matter of mindset and leadership, of accepting autonomy within a big group. Jo&Joe (the new brand), for example, had full autonomy (in its creation and budget) in the last seven months. You have to accept that you need to give freedom to some of your executives, and that they actually ask for it. Seven out of 10 times it will work. The three times it didn’t work do not matter.

Simplistically, legacy companies have been run and operated on a vertical manner. Top down. The boss decides and imposes, the people act. I’m thinking exactly the opposite. A company of our size should be horizontal, and a person who is 32 years old, even though he has less experience, should be able to make decisions without asking for permission.

You gave yourself three out of 10 on where you want to go. Where do you want to go?
I came on board three years ago to wake up a sleeping giant. And when you want to do that you need to be bold, a creative thinker and you have to be tough. You have to tell people that what you’ve done for 50 years is great, but now you have to shift the mindset and do things differently.

Accor and many other companies have been making decisions based on two things: new brand and new concept. We invented Ibis, Pullman, Sofitel; IHG (InterContinental Hotels Group) Holiday Inn and Crowne Plaza; then there’s Hilton and Hampton Inn, and we all forgot the client. What matters in the next 40 years is the client. Of course you defend your brand, but before you invent a new concept, ask what do your clients want tomorrow which is different from yesterday?

This is why you see so many new concepts like citizenM, Mama Shelter, etc. They attract clients because they are different, less dogmatic, more surprising, have fewer norms and they think of how to personalise the service.
So I’m moving from brand and concept to client first.

You’ve said the industry has been a sitting duck on three waves – OTAs, meta, sharing economy. What is the fourth wave the industry should look out for?
Certainly it will be something related to data…companies like Facebook, Amazon, Google and eBay without you knowing collect your data, so they can reinvent the new business model of tomorrow.

It’s actually scary when you look at the world today. Of the 500 large companies, 400 that existed 25 years ago – the IBM’s, General Electric’s and General Motors’s of the world – are no longer on the list. You do the same ranking in 10 years and of the existing 500, 400 will not be on the list. Why?

It’s mainly because all those new companies have five things in common. They are created by people below 35 years old. Ninety-five per cent of those new companies are created on a blank sheet of paper – no legacy. Ninety per cent are based on brand new technology – more efficient, more speed. Ninety per cent are addressing the world as their client base, not city, not country. And 90 per cent are organised in a horizontal manner, not vertical, so no status; if you have information, you share the information.

All the new players – distribution, private rental, concierge, etc – have been invented by non-hospitality companies. That has to stop. We too have to be at the forefront of new businesses.

You’ve acted by buying technology providers, providing technology to indies, buying sharing economy players, plugging cities where customers are going, plugging Accor’s luxury gap, buying John Paul concierge service, etc. What’s next – data companies perhaps?
We’re shifting from being asset heavy to asset light as we may be disposing US$5 billion worth of real estate and moving into data. I’m more and more into data analytics. I don’t know if we’ll buy a data company but we are spending more and more time with software companies, which is what companies such as Visa and Mastercard are doing. And the additional thing I guess is to link data with social networks.

When hotel chains launch new brands, aren’t they putting their old brands at risk since the new brands are being created for future travellers?
Yes, but if you don’t, someone else will. We’re not putting the old ones at risk, we are provoking them. We ask Ibis, Novotel, Pullman to think a bit every day about what they should be doing differently. Anybody who thinks his brand will still be valid in 10 years without rethinking will die.

As I mentioned, it’s because clients will be more and more demanding. Due to the existence of social networks, people have more and more information, recommendations, knowledge. You aren’t talking to a number, you are talking to a person. That person has aspirations. You want to understand what they are. The good news is, a person’s aspirations don’t change when he goes from Paris to Bangkok, so if you follow him, you can replicate what he wants in Paris in Bangkok or New York without the person asking again and again for it. That’s data analytics.

Do you need to consolidate brands in your portfolio, now that you’re bigger?
(Everything that we’ve bought) was not by accident. We decided with Michael (Issenberg, chairman/CEO Asia-Pacific) and team we had been too heavy on economy/budget hotels, which comprised 50 per cent of Accor, so we increased the diversification with Fairmont-Raffles and now 35 per cent of the portfolio is luxury/upscale, up from 15 per cent before.

Same with OneFineStay. Clients who are fewer than three people and are staying for two nights continue to come to my hotels. But if they are seven to eight persons with kids, staying for a week, they will go to someone’s private home if they can find a similar experience for cheaper. But they need service and assurance. So why can’t Accor be the service provider for somebody else’s home for the same client who will stay with me if it’s two nights?

It’s called retention. I don’t want to lose my relationship with my clients.

How so?
Since it is blessed, growing, scaleable, it is one of the industries that is impacted the most by the new digital players, because they too want to benefit from this growth. Which is why you see Booking.com, Expedia, Kayak, Trivago, Tripadvisor, the Ubers of the world attack the industry, because the industry is so vast.

So for a company like ours, if we want to participate in the growth of the industry, we have to be more and more technologically-oriented and more and more savvy in creating new business. Which is why I said we should have invented Airbnb. And that is why we have created Jo&Joe, because we are not going to have the millennial space taken by others.

So, ours is a great industry but be careful. That industry is being attacked by new initiatives and players with more agility than we have.

Have you covered all the segments you want?
Did I believe three years ago we would launch Jo&Joe? No. I’d even be more honest: of what we have done in the last 12 months, all the acquisitions – Fairmont-Raffles, John Paul, OneFineStay, etc – no more than half of these were in my mind 12 months ago. That shows how fast you need to adapt.

Do we have what we need today? Yes, but I may invent another segment in three years because the market would have involved. The world is moving so fast. Accor is not moving fast enough, but we are moving much faster than my competition, that’s for sure.

So we are spending more time to develop Accor brands in mainland China, in order to increase the visibility of our brands in China. We own 10 per cent of Huazhu (China Lodging Group)…you need to partner experts and think ahead in this market.
The other market we need to go deep into is India. It is going to take 10 years but India has the population size. We also need to grow big in Africa and Iran, where there will be a lot of appetite for travelling.

Do you think the wave of hotel chains consolidation over?
I don’t think it is over. Marriott/Starwood is proof that scale and size matters today. There are seven or eight large hotel chains; it’s only the beginning. But Accor has one big advantage: it is a world leader in terms of size if you exclude only China and the US. In Europe, Asia-Pacific, Australia, many places in Eastern Europe, etc, Accor is number one. We don’t have any need to participate in consolidation because we already are a leader in many of the markets we operate.