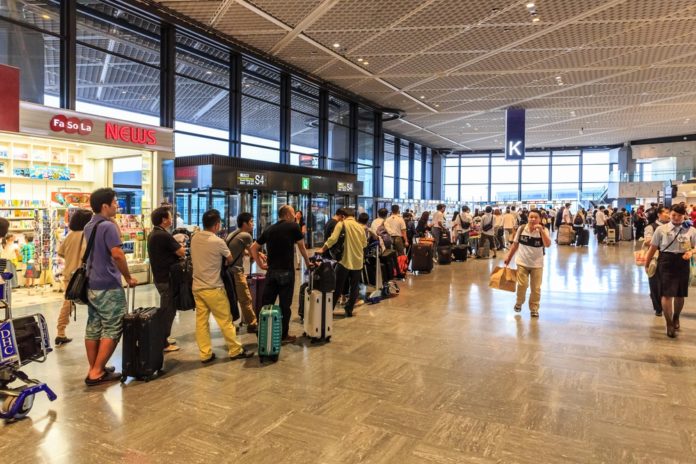 IN an effort to dramatically speed up immigration procedures, Japan is planning to introduce a pre-clearance system at airports in South Korea and Taiwan.

Travellers will complete screening before even boarding their flights, enabling them to pass through Japanese airports – which are becoming increasingly congested as tourist numbers soar – much more rapidly.

Travel companies overseas have welcomed the plan and say it will be a “big bonus” to their clients.

Under the proposed scheme, which is scheduled to be put into operation in fiscal 2017, Japanese customs and immigration officers would be stationed at the airport of departure to verify passport information and the contents of their luggage.

After arriving in Japan, these pre-screened travellers would be directed to a special lane for a brief screening before leaving the airport.

If the programme proves to be effective, Japanese authorities plan to roll it out to arrivals from more nations.

International arrivals in July alone leapt 19.7 per cent from the same month last year, with 2.297 million visitors setting a new monthly record. The previous record of 2.082 million was only set in April this year.

“This is a very good idea and will obviously be a big bonus to our clients,” said Sarah Lee, spokesperson for Seoul-based Va Kangs Travel. “Anything that the authorities can do to smoothen the arrival procedures will be of help.”

O&J Travel’s agent Amy One agreed that “improved efficiency and speed for people who are arriving will make the destination more appealing.”

Long lines at immigration at Japan’s busiest airports, such as those serving Tokyo and Osaka, mean that new arrivals often have to wait for more than one hour to be processed. The government is aiming to reduce that to a maximum of 20 minutes by 2020, when Tokyo will host the Olympic Games.