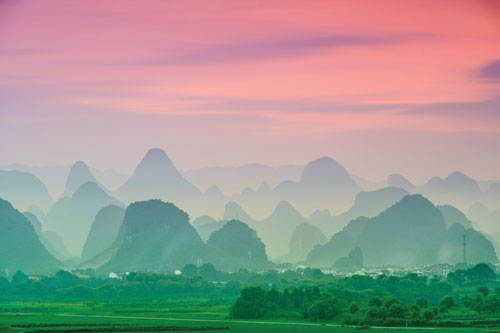 According to Guilin Tourism Administration, deputy secretary general, Zhao Gui Xing, new road networks such as the Liuzhou-Sanjiang Expressway have also boosted connectivity in the destination.

He said: “Traditionally, it took four to five days to tour around these towns with lots of time spent on the road. (Now), travel convenience has improved with an enhanced two-pronged rail and road system. Hopefully this will draw more tourist traffic from the Pearl River Delta, Hong Kong and Taiwan in the future.”

Since the launch of the inaugural Guiyang-Guangzhou high-speed rail in 2014 to link up China’s mountainous south-west with Guangdong, Guilin’s network has flourished with more new routes to cities such as Guangzhou, Shenzhen, Guiyang, Changsha, Wuhan and Zhuhai.

Sheraton Guilin Hotel’s director of sales & marketing, Portia Zhou, sees the greatest benefits from the Guangzhou-Guilin service, which boasts the highest frequency and shaves travel time on this route from 12 hours to two hours 40 minutes.

Said Zhou: “With the train network and construction of new highways, Guilin tourism and hotel markets have won new opportunities from the neighbouring countryside.

She added: “Longsheng and Sanjiang are now packaged together as new sightseeing points, strengthening Guilin’s appeal for the leisure market. The FIT segment grew 50 per cent from the previous year.”

Sanjiang – a remote town 150km from Guilin – can now look forward to more international visitor traffic with the D2975 (Liuzhou-Sanjiang) train service launched in May 2016. Plying between Sanjiang South Station and Guangzhou South via Guilin, the journey time from Guilin to Sanjiang now takes only 30 minutes, down from the previous three hours 45 minutes.

Commenting on the change, Guangxi Tourism Development Group, vice general manager, Lu Bo, said: “Given the birth of new highways, Sanjiang is now at the crossroads between Hunan, Guizhou, Guiyang and Guilin. Moreover, the town is home to the Dong people, who boasts  the biggest presence among Guangxi’s ethnic minority groups.

“Our company is keen to push a Greater Guilin Tourism Area concept, (integrating) small towns nearby like Sanjiang and Danzhou to create a brand emphasising culture, wellness and ecotourism.”

This explains why the group has actively pumped investment into Sanjiang’s tourism infrastructure, such as revamping the Chenyang Eight Villages (see page 27), constructing a large-scale resort centre at Sanjiang Bay, and upgrading the Sanjiang Bird Nest. The group welcomed its first fam tour from Taiwan in March 2016.

Shangri-La Guilin’s general manager, Leslie Wang, has noted an increase in leisure tourists since the expanded railway network places Guilin at the crossroads on the Guiyang-Guangzhou route.

“Our hotel received better results from the expanded railway network, especially in Hunan. It almost doubled our (guest numbers) from 2014,” he said.

“We observed a growth in Shenzhen, Guangzhou and Dongguan as well. The high-speed railway definitely accelerates Guilin towards the urban economy with this integration.”

This article was first published in TTG Asia, August 5, 2016 issue, on page 24. To read more, please view our digital edition or click here to subscribe.