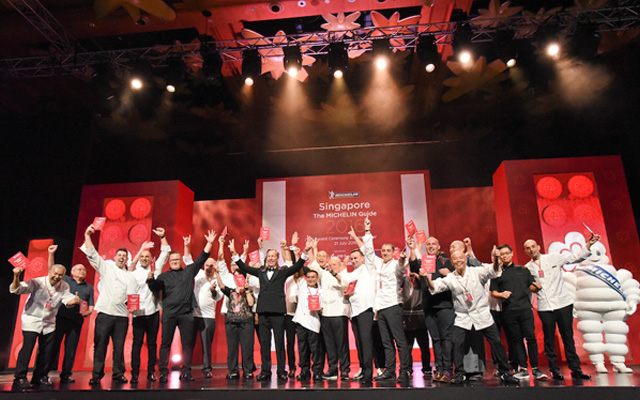 SINGAPORE became the only place in the world possible to get a S$4 (US$2.90) Michelin-star meal as two hawker stalls were conferred a one-star Michelin rating in the first ever Singapore Michelin Guide. These results were announced at the gala dinner at Resorts World Sentosa yesterday night, in addition to the Bib Gourmand list released last week.

Hill Street Tai Hwa Pork Noodles’ owner Tang Chay Seng was nonchalant about the award but said that he was surprised by the inclusion of his stall in a list filled with fine dining establishments. Yet he stressed, in Mandarin, that they “are not the same” and that it “cannot be compared”.

On the other hand, Chan Hon Meng of Hong Kong Soya Sauce Chicken Rice & Noodle, seemed overwhelmed by the attention.

Chan said in Mandarin: “I feel very privileged and am very happy with this recognition. I hope every year there will be a hawker that gains such a recognition. Nothing will change for us.”

In all, 22 establishments received the one-star rating, such as the only Peranakan restaurant on the list, Candlenut, and Corner House, located within the UNESCO-listed Botanic Gardens.

When asked if the award will entice more tourists to try our local food, chef Malcolm Lee of Candlenut, said: “We have some following (in Singapore), but as this guide is international, I guess there will be a lot more tourists (coming to visit) given that we (offer) local-style cuisine.”

Corner House’s Jason Tan, another home-grown chef, agreed: “I think we will definitely see an increase (in tourists). Our restaurant is in a UNESCO site, so that in itself is already a plus point. Our restaurant currently gets a lot of guests from China, Indonesia and Hong Kong, and I hope that more will come.”

Meanwhile, six restaurants such as Odette, which only opened late last year, and Restaurant Andre, obtained two stars each.

When asked if it makes it easier for people around the world to recognise his eponymous restaurant now that there is a Michelin-star branding, chef and co-owner Andre Chiang, said: “I personally think it might not change much (for Singaporeans), but it is an important reference for people outside of Singapore when they come here, (as a reference) to choose where to go and what they want to try.”

Julien Royer, chef and co-owner of Odette, opined: “I think the Michelin Guide will definitely impact traveller habits. Nowadays when I travel, I look at Michelin Guide and many other platforms, and as the Michelin Guide is the most prestigious one, this will – hopefully – bring a very interesting crowd to our restaurant.”

The only restaurant conferred three stars was Joël Robuchon’s eponymous restaurant at Resorts World Sentosa. The veteran chef now has 30 Michelin stars across his restaurant empire, and remains as the chef with the most number of Michelin-stars under his belt.

Regardless, the Michelin Guide will help place Singapore in the global spotlight, and boost the country’s reputation as a gastronomic hub.

In his opening speech, Lionel Yeo, chief executive of the Singapore Tourism Board, said: “I was having a meeting with some senior executives of a large travel agency – they are based in North Asia and account for 12 per cent of visitor arrivals for Singapore – and they were very excited about the Singapore Michelin Guide.

“They were discussing with us how they could incorporate more dining experiences for their customers, so that they can sell such packages and entice more people from their market to come to Singapore.”

Michael Ellis, international director, Michelin Guides, concurred: “(Based on the spotlight that we give), the arrival of the Singapore Michelin Guide (should) generate a significant number of gastro-tourists – people who plan their vacations around where they are going to eat.”