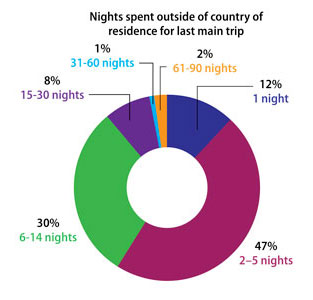 Following its earlier The Rise of the Young Asian Traveller report, PATA’s second youth survey Stepping Out of the Crowd looks at the travel tastes and attitudes of over 1,000 millennials (16-35) from 13 source markets in Asia as this generation will be the main demographic behind region’s outbound tourism growth in the next 10-15 years. For these young travellers, free time is in short supply, making short breaks of between two to five nights the most popular option (47%), while longer holidays of one to two weeks were also common (30%). Given the high proportion of student respondents (66%), it is unsurprising that one in five stated time was more of a constraint on their travel plans than money.

Extended holidays of more than two weeks are rare though. This correlates with responses that respondents felt they did not have enough time in their destination. This may be due to the reason that the concept of extended travel periods such as a gap year is relatively uncommon in Asia, where cultural and family expectations of studying hard and climbing up the career ladder were more important than travelling.

As such, the lack of available free time is the biggest limitation to how much Asian millennials can travel. Limited budgets come in at a close second, and this influences the number of days that their money will last for food and accommodation. Millennials are tech-savvy and global curious, which is also driving the growth of free and independent travel. With the prevalence of mobile devices that can assist planning on the go, and a constant flow of travel inspiration and advice garnered from social media, millennials are well-prepared to travel freely.

More than half of the respondents expressed a major preference for booking all aspects of their trip independently, without the need for packaging by an OTA, or the assistance of a traditional desk travel agent. This is in line with the wider consumer trend in travel which is leaning towards booking tours without the middleman, as the Internet has allowed for rapid price comparison and the ease of online booking.

For the 16% of respondents that indicated that someone else booked the trip for them, this may be attributed to parents or family members. It is also significant that a mere 11% of respondents used the services of a traditional travel agent.

Composing an itinerary while on the go is apparently the preferred way to plan – 83% Asian millennials said they will create a basic plan of what they want to see in advance, and work out the rest of the details when they arrive at the destination.

Looking at traveller review websites such as TripAdvisor was the most popular way of finding information on activities and attractions (27%), while one in five respondents said that they were inspired by what their friends posted on social media (20%).

This shows that social media is a very effective and useful tool in inspiring, informing and recommending travel options to Asian millennials. It also shows how peer groups play a part in influencing the decision of this demographic, significantly more than any official source of information such as local tourism board websites, visitor information centres, and advertisements in traditional media. It is also worth noting that the two trust sources of information for young Asian travellers were the printed guide book and professional travel blogs (both 13%). Time is of the essence for young Asian travellers when visiting a foreign city. They prioritised seeing the big attractions first, seeing the city with the aid of an organised tour (taking a bus or boat where possible) or following a pre-set tour individually, as such programmes are usually organised for a pre-defined amount of time, thus enabling easy scheduling and preventing wasting valuable travel time.

Spontaneity, or the notion of ‘discovering the backstreets’ are not very popular among Asian millennials, perhaps because they are not seen as a good use of time. Letting someone else take charge of the plans was the least favoured option, indicating that young Asian travellers like to take control of what they will be doing in order to ensure that they will get the most out of the trip.

Connecting with the city through its heritage, traditions, events and locally-produced items is a major priority. Asian millennials, similar with their global counterparts, like to seek out what makes a city’s past distinctive amid a globalised world.  Modern culture and ‘cool things to do’ for local youth are also a major attraction, with 85% indicating that they like to discover modern culture and fashion trends.

Food is fundamental – but in the streets and at the supermarket, rather than at the table. A significant 85% of respondents said that they love to visit a food market, and 72% liked to visit a supermarket when in a foreign city. Experiencing a city’s nightlife is not a priority for Asian millennials on the other hand. Perhaps in contrast to their counterparts in other regions of the world, going to bars and clubs is not rated so highly in terms of getting to know a new city.

This article was first published in TTG Asia, May 6, 2016 issue, on page 9. To read more, please view our digital edition or click here to subscribe