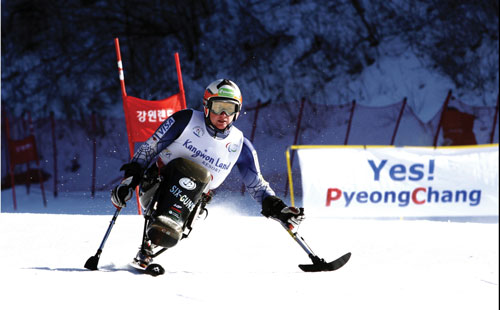 South Korea is not yet a top-of-mind winter sports destination, but industry members hope that the 2018 Winter Olympics will showcase the country’s finesse in this arena. South Korea has hosted major sporting events – the 1988 Olympic Games and joint hosting of the 2002 World Cup with Japan – and its athletes have a solid track record in Winter Olympics Games, but the nation’s ski resorts have, to date, been primarily designed to meet the needs of domestic travellers.

But the travel trade is confident that will change when Pyeongchang hosts the 2018 Olympic Winter Games. The XXIII Winter Olympiad will train sights on Pyeongchang, a county in Gangwon province, where facilities including hotels and a world-class ski resort are currently under construction.

“We hope the Winter Games will have a huge impact on tourism,” said Jung Chang-soo, president, Korea Tourism Organization (KTO), who hopes that the major sporting event will showcase South Korea as an attractive year-round winter sports destination.

Jang added: “Winter sports are getting more popular in South Korea. As 70 per cent of South Korea is mountainous and our winter lasts four to five months per year, the country has a huge potential to be developed as a winter sports destination for foreign travellers.

“South Korea is already a winter sports destination for national visitors. The number of travellers from neighbouring countries are also rising during winter period,” he elaborated.

The local organising committee for the Pyeongchang 2018 Winter Olympic Games has signed a MoU with KTO to collaborate on a number of projects designed to raise the profile of South Korea as a tourist destination.

Winter sports in South Korea are starting to gain a following among regional visitors, according to trade players.

“We’re not like the Nordic nations, who have been doing winter sports for many years. (However, it is) becoming more popular in South Korea,” said Seo Tae-won, director of Seoul-based Suhyun Tour, one of the five official partner travel agencies for the games.

“We are beginning to gain a reputation with the people of South-east Asia who want to try skiing and snowboarding, etc, but aren’t able to do it in their countries,” he said. “And for people from Thailand, Singapore, Malaysia, South Korea is much cheaper than Japan.”

Seo expressed hopes that even after the Games are over, Pyeongchang will continue to attract winter sports fans worldwide as the city would have seen an injection of new sporting infrastructure and hotels during the Games.

Min Woo, head of public relations for Hana Tour, agrees that Pyeongchang’s successful hosting of the Winter Olympics will serve as a major boost for the entire winter sports sector in South Korea, but expresses concern that the broader travel industry will not feel a genuine uptick in business.

“People will love the Games, but that will only be visible in Pyeongchang,” he said. “Tourists will still primarily come (to South Korea) for the shopping, food, and Korean pop culture.”

Similarly, Oh Donghee, sales executive at the Koreana Hotel in Seoul, is not sensing much of an immediate benefit from the Games, although he hopes that it will raise the profile of South Korea as a destination.

“Seoul is too far from Pyeongchang so there will be no major increase in the number of people staying with us during the events, although we may see a few more as people arrive in South Korea before they go on to the Games,” he said.

Promotional efforts have not started in earnest yet, Seo said, adding that the travel industry would appreciate greater strategic support from KTO to spread the word. All stakeholders need to break through the bureaucracy that could slow down efforts to promote the Pyeongchang games, he opined.

Seo added: “It may take a while for South Korea to catch up with Japan in terms of winter sports infrastructure, but that’s ultimately where we want to be.”

This article was first published in TTG Asia, May 6, 2016 issue, on page 22. To read more, please view our digital edition or click here to subscribe.