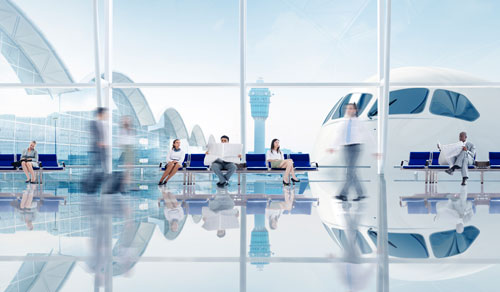 Every flight for a traveller begins and ends with an airport experience and the quality of that experience has the potential to make or break the trip. Memories of yesteryear when one could breeze through all the formalities and board a plane are just distant memories as travellers today brave long queues at immigration and cumbersome security screening.

The post-9/11 airport landscape has seen added layers of security and long snaking queues at immigration and customs clearance, turning checkpoints into choke points. The impacts are felt not only by airlines which have to deploy staff to “extricate and expedite” passengers on flights that are departing shortly, but also the retail and dining concessionaires as every minute that travellers are stuck in a queue is a minute not spent browsing the retail outlets or dining at an F&B venue.

Frost & Sullivan’s Global Airport Passenger Screening Market report indicated that a slew of new technologies such as portal scanners, biometric collection devices and pre-clearance based on background investigations will transform the passenger screening process and result in unobtrusive screening. The investment in such technologies is hefty, estimated at US$1.4 billion in 2014 and increasing slightly to US$1.6 billion in 2020.

Frost & Sullivan’s senior industry analyst, John Hernandez, said: “One solution could be to supply passengers with alternate venues and automated tools to pre-screen them before they arrive at the airport.”

Identification of high-risk passengers prior to their arrival at the airport is a key element in improving security and airports are also considering innovative technologies capable of screening large numbers of passengers quickly and accurately.

Near field communication (NFC)
Many airlines and airports today work with 2D QR-coded boarding passes sent to mobile devices but there is an inherent distrust in this system as boarding passes can be forwarded, duplicated and manipulated. And when this code is not recognised or retrieved, travellers will need to have their identity verified and their boarding passes printed. This is a time-consuming process.

A short-range communication system using wireless technology that connects two devices, NFC got off to an uncertain start but momentum has been gained since 2005.

SITA and Orange have entered into a partnership to roll out a SIM-based solution that loads the boarding pass into a travel wallet in the traveller’s mobile phone at the end of a counter or kiosk check-in. This can then be used to tap into a device that grants access to lounges and boarding gates. There is no need for any mobile phone applications, boarding pass or data connectivity. This even works when the mobile phone is turned off.

In 2014, SITA and Orange partnered Air France to put Touch&Pass on a six-month trial at Toulouse-Blagnac Airport, where selected passengers with NFC-enabled smartphones flying between Toulouse and Paris Orly were able to pass through airport checkpoints by tapping their phones against dedicated readers. A previous trial was also conducted at Nice Airport. The system being trialed conformed to standards from IATA and GSMA (which represents the interest of mobile operators worldwide).

Meanwhile, NFC is already in use at Sydney, Melbourne and Brisbane airports where passengers with Android devices can download content from digital screens while waiting to board their flights.

IATA Checkpoint of the Future (CoF)
Goals of the IATA CoF initiative are pivoted towards strengthening security, increasing operational efficiency, improving passenger experience through the reduction of queue and waiting times, and the use of technology for a less invasive and disruptive search.

CoF entered its concept definition stage in 2012 where the regulatory requirements, policies, operational scenarios and technologies used were considered. The development of CoF has since included the participation of Airports Council International and specific targets were contained in the CoF2014 blueprint, with a further CoF2017 blueprint as the next objective.

By 2020, when the CoF2020 blueprint is reached, it is envisaged that “the passenger will be able to flow through the security checkpoint without interruption unless the advanced technology identifies a potential threat”. Each passenger will be assigned a level of security screening based on states of departure and arrival through real-time bilateral risk assessments. Singapore’s Changi Airport is one of the world’s more progressive airports with a proven track record of building capacity ahead of demand. It is currently operating at more than 80 per cent of its designed capacity of 66 million passengers per annum.

The development of T4 has presented Singapore with the opportunity to implement its Fast and Seamless Travel (FAST) initiative, which is anchored by a suite of self-service and automated options from check-in and baggage handling to immigration clearance and boarding.

FAST is supplemented by biometric facial recognition technology to eliminate the current need for manual identity verification at a minimum of five touchpoints. In a major shift in concept, a centralised and more efficient security screening system will be introduced at T4, a change from T1, T2 and T3 where security screening takes place at each boarding gate.

Changi Airport Group’s executive vice-president, Yam Kum Weng, said: “With T4’s emphasis on innovation and productivity, passengers can expect passage through the various touchpoints to be smoother and stress-free, giving them more time to enjoy the facilities and wide array of shopping and dining options.”

Biocarts at Japanese airports
Passengers arriving at Japanese airports in the future (possibly sometime after 2017) could see relief at the immigration hall. The increase in foreign visitors in recent years has resulted in longer queues and the Justice Ministry is seeking an allocation for “biocarts” in the fiscal 2016 budget. These are mobile stations that capture passport information, a visitor’s mugshot and fingerprint, which will be digitally transmitted to the immigration desk.

The time a visitor spends at the desk could be reduced by half, according to a senior Justice Ministry official. From January to June 2015, the longest waiting time for immigration was 36 minutes at Osaka Kansai, 20 minutes at Tokyo Narita,  and 24 minutes at Tokyo Haneda and Nagoya Chubu.

“Cloud” over Perth Airport
As part of Perth Airport’s AU$1 billion (US$714 million) investment in “an overall transformation of infrastructure”, it has signed an agreement with Amadeus to introduce ACUS (Airport Common Use Service).

This cloud-based technology makes use of application virtualisation that allows passenger processing systems to be accessed and deployed anywhere on demand, and on platforms ranging from desktops to laptops, tablets and other mobile devices. Passengers may be checked-in and their boarding passes printed from any location. The same devices can handle passenger processing for multiple airlines at the same time.

Concierge on the ground and in the air
SabreSonic CSS is offering airlines and airports its Mobile Concierge mobile check-in solution that promises to bring check-in agents from behind their counters to become roving customer service agents.

Working on mobile devices, agents can check in passengers, print boarding passes and baggage tags while at the same time provide a more personalised service. The system is also able to identify when a high-value customer has entered the airport vicinity and requires check-in.

The integration of a credit card and passport reader facilitates the capture of passenger information and ancillary purchases. The end result of the implementation of this technology is the reduction of passenger queueing and reduced costs by saving time and allowing ground staff to be more efficient. This system can also be further expanded to identify and deliver additional services for high-value customers in the airports and airplane cabin.

Privacy concerns, security of personal information and state security dictate that the roll-out of most such evolving technologies will take time. Until then, there are steps that airports and travellers can take to mitigate the bottlenecks and frustrations at security check points.

These include standardisation of requirements and processes at airports around the world; sign-posting security requirements a distance ahead of security checkpoints; and providing space for travellers to remove all necessary items before joining security screening queues.

Travellers can also do their bit by minimising the amount of metallic jewellery and accessories worn, and keeping mobile devices such as laptops and tablets more accessible as these must be taken out of hand luggage during security screenings.

Aviareps’ chairman and CEO Michael Gaebler noted that today’s travellers are much more connected and Asian airports are ahead of their European counterparts in providing Wi-Fi connection. With airports turning into mega malls in many cities, Gaebler feels that passengers will greatly appreciate high ceilings with more natural light and, most importantly, quiet zones.

Thankfully, there are airports in the Asia-Pacific region that already have light and airy terminals, themed gardens, quiet snoozing corners and spa facilities with swimming pools. Travellers at Incheon Airport can even gain hands-on experience in Korean arts and crafts, and witness a royal procession as it weaves through the terminal several times a day.

Indeed, the already pampered traveller’s airport experience is all set for a game-changing revolution in the coming decade. Hub airports and those aspiring to be one will have to make that big leap in mindset and investment to offer a more pleasant experience from kerbside to aerobridge and vice versa.

This column is brought to you by TravelRave, Asia’s premier travel and tourism week offering a dynamic platform for business leaders and industry professionals to convene and share insights on pertinent issues and key trends in the travel industry. The events, co-located in Singapore under the auspices of the Singapore Tourism Board (which also organises the Asia Travel Leaders Summit), will be held from October 19-23.

This article was first published in TTG Asia, October 16, 2015 issue, on page 15. To read more, please view our digital edition or click here to subscribe.