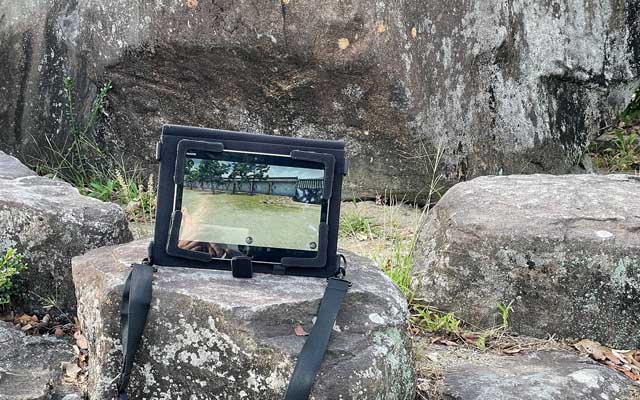 Kyushu’s tourism stakeholders are adopting greater use of virtual reality (VR) and augmented reality (AR) at destinations in a bid to entice increasingly travel-savvy visitors in search of the hottest travel trends.

VR, a simulation of a three-dimensional environment that can be interacted with in a seemingly real way, and AR, which superimposes images on the user’s view of the real world, have been used by companies throughout Japan during the Covid-19 pandemic.

From offering tours of hotels and aircraft to attractions and even cities, the technologies have been used by travel-related companies, including JTB Corporation, Hankyu Travel and Japan Airlines, to recreate a piece of Japan for people stuck at home.

Now, Japanese organisations are using VR and AR to enhance products and services via a more immersive experience for in-person guests.

In Oita Prefecture’s Hita, where the renowned manga Attack on Titan was created, the city’s tourism association is promoting an AR-supported app. After downloading it, visitors can travel to sites from the manga that are located across the city, where they can superimpose themselves or other characters onto the screen.

“We launched the app in 2020 so international visitors haven’t really had a chance to try it yet,” said a spokesperson of Hita City Tourism Association. “We’ve had great feedback from the domestic market so we hope the inbound market loves the app too.”

In Nagasaki Prefecture, tablets on offer at Hara Castle, which is merely ruins, offer users the chance to see what the castle would have looked like in its heyday, thanks to VR.

Neighbouring Shimabara Castle, meanwhile, has created an AR headset that allows visitors to see and touch exhibits that appear to float in front of them.

A staff member at Shimabara Castle said further technology developments are underway, including VR walkthroughs of the castle in Japanese, English and Korean, to “bring its history to life”.