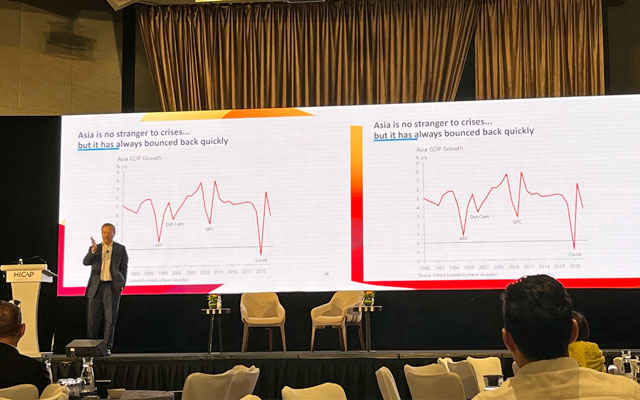 While Asia is no stranger to crises and has always bounced back quickly, “this time is different”, warns Arup Raha, chief economist Asia of Oxford Economics, at the Hotel Investment Conference Asia-Pacific (HICAP) 2022 in Singapore last week.

Raha said in previous crises – the two largest being the Asian and global financial meltdowns – the region had two solid factors behind it, which were steady interest rates, and China.

“The US Fed (Federal Reserve System) kept interest rates steady, but typically during these times they were reducing interest rates, which then gave Asian countries the freedom to be able to reduce rates,” said Raha.

Slow recovery for China
China’s slowdown is not today’s story; it has been going on for a decade (see blue line in chart), said Raha. Covid and the policies China implemented during the period exacerbated its downturn. Even if China rebounds in the long term, due to its demographics, productivity growth and shift from an export to service economy, Raha stated that “China isn’t going to be the China we are used to”.

What also matters to the tourism industry is the price of energy, which has never been this high or this prolonged, and the difficulty of predicting where it would go.

A consequence of the energy crisis and the “severe” supply shock is inflation. Apart from higher costs of operation, although mitigated by higher rates and efficiencies wrought through Covid, inflation will also affect travel intentions. Raha said: “Tourism is a bit of a luxury good. If I have to tighten my belt, foreign travel is the first thing to go out of my budget.”

The right response
The one bright spot from this crisis is that governments have learnt to deal with a fiscal response. Singapore, for example, responded with two packages that amounted to nearly 20 per cent of its GDP.

“You can claim that the problems of inflation we see today are (because) governments over-responded, that there was too much fiscal stimulus. But I think that’s the right policy. Given the uncertainty related to the pandemic, the right way was to over-respond than under-respond – because you could get institutional damage if it went on too long,” he opined.

“We are much stronger institutionally. We had the ability to deal with a fiscal response.”

As well, with rising inflation, governments have not rushed to tighten policy, said Raha, citing Indonesia, which raised interest rates only a few months ago.

Institutional ability aside, the environment is “not nice”.

“Our forecast for Asia is that you see the initial bounce take place and now, the slowdown is coming. China will pick up but (will not be as) robust as in the past. Thailand is going to do much better – they should get half the number of tourists (40 million in 2019) in a year or a couple of years. Russians and Chinese face institutional constraints to travel, it has nothing to do with economics and it is almost impossible to predict when they are going to open up.

“Secondly, we don’t know how much structural damage has been done to the hospitality sector. In Phuket, a lot of restaurants and hotels have shut down.”

In the post-pandemic environment, demand has rebounded quickly, but supply is slow to respond. Russia’s invasion of Ukraine triggered upheaval in the commodities market, where investments in traditional energy have been low, said the senior rates strategist at ANZ Bank.

Currently, the dollar is “king”, as Europe and the UK are grappling with a cost of living crisis, and China is facing “the risk of inflation”. Asia, excluding China, is caught deep in this global crossfire, said Kusuma.

On China, she said: “It’s hard to rebound when you are forced into lockdowns. Property buyers did not react positively to interest rates cuts.”

ANZ Bank does not expect China to reopen in 2023.

Said Kusuma: “Even if we see a path to a soft landing, we should prepare for more challenging economic conditions ahead of us and recognise where the opportunities are.

“Some of this will be temporary but geopolitical tensions, as well as de-globalisation, will suggest that some of the supply constraints will stay with us for longer.”