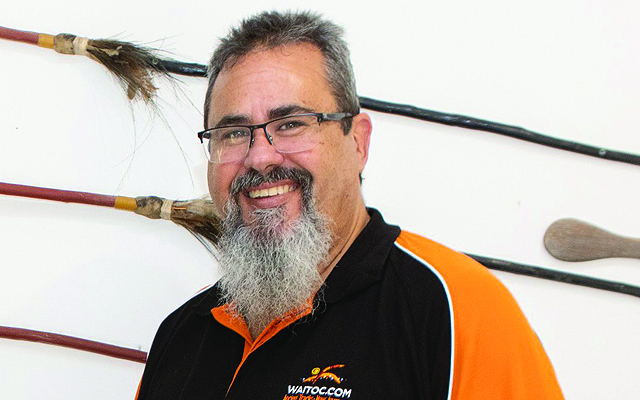 What is your cultural story and how did you end up with this mission to promote Western Australia’s Aboriginal culture in tourism?
I am Nhanda, possibly one of seven language groups of Yamaji nation. I work in Perth, which is known as Whadjuk country. There are probably 250 Aboriginal language groups across Australia, and WA has quite a diverse culture right across the state as it’s so large.

I’m a trained chef by trade and was working in a hotel when I met my wife and we went into business together, running resorts and hotels. We had a management rights company called Forte Hospitality, and from there, I joined WAITOC as a board member around 2010.

I worked my way up to be the chairman of the organisation, and then became the first Aboriginal CEO of WAITOC. My current chairman, Doc Reynolds always says we went around the world to find an Aboriginal CEO for the organisation because we started with a lady that was Dutch. Then we had a Maori, an Irishman and then finally an Australian.

You talk about the need for education about Aboriginal culture. What do you feel most tourists miss?
Aboriginal people are very connected to their country and they feel connected through the earth. Since the beginning of time, Aboriginal people worked and they didn’t think they owned the land. They were there to curate and look after it.

Some colonist diaries may say that Aboriginal people just roamed around, but actually they didn’t. Can you imagine the old story of going walkabout? If you were to live in Perth and had to walk across the other side of Australia, that would take you forever.

The only reason why they might have seemed nomadic is because they didn’t have houses like we do these days. They built structures, but they were short term to live in for a certain amount of time. When the weather changed and it became too hot or too wet in an area, they would move to a different area.

Why is it important for tourists to know this? And why is it important for Australian tourism?
Well, obviously Aboriginal Australians were the first people of Australia and they have been displaced through colonisation as a lot of other cultures have by the English across the world. It’s really about understanding and respecting the country that we live in, and when visitors come, Aboriginal people would like them to experience the whole country, and understand that one Aboriginal culture is completely different from another.

The change in the landscape across WA also changes the way people live. For example, to light a fire down in the Southwest, people would spin sticks around on another stick and it catches on fire. But if you go to the Pilbara (in the North), they would have used flint because rock would have been more available to strike a spark.

It also applies to the understanding of our Welcome to Country ceremony, because Aboriginal law dictates that the different language groups and cultures had to stay in their areas. Only one chosen person was allowed to travel between different groups to deliver messages and bring people together.

Plus, we had places like Mandurah which is known as the meeting place of the heart. That’s where people used to meet from all the fourteen clans to choose a wife and to get married. So different regions have different meanings for people. There were places where men don’t go, for example birthing holes, and places where women don’t go. They would mark those in trees, so if you were in Kings Park for example, you would understand where you should go and where you shouldn’t go.

We could sit here for hours talking about the many differences but there is a huge amount of culture in Australia and Welcome to Country was put in place because it’s like welcoming someone into your house. If someone just walked into your front door and started walking around, first of all, you’d be a bit worried and ask, what are they going to take?

And then it’s also just a respect that when you come into someone else’s country or house that you introduce yourself and ask permission, if you can come in, because the other connection to the country that Aboriginal people have is that if you were in their country and you weren’t welcomed in and you hurt yourself, they would feel bad. It’s a matter of connecting to the people on that level as well, so that they can give you safe journey through their country.

Now more than ever, there is a growing demand for meaningful travel and unique destination experiences. How can tourists engage respectfully with your culture?
WAITOC is obviously a great place to start in WA because we have over 180 Aboriginal tourism businesses in our membership and they’re all highlighted on our website. Most Aboriginal tourism products do give you a life-changing experience where you are learning about the culture, their Dreamtime stories, where they lived, and how they lived.

When you go on the tours, depending on where you are, you can go hunting. By that I don’t mean going out with a gun and shooting things. You are foraging and finding shellfish, mud crabs and spearing fish. The person might build a fire or show you how to build a fire, so you’re really learning a little bit of survival as well, and then they cook it for you.

Some tours might talk about the dark history as well. The dark culture being about colonisation and how children were stolen away from their regions and their families. There were missions set up where they would take kids from all over Australia and put them in there. If you know Rottnest Island, which the people call Wadjemup, you’ll hear how it was a prison for Aboriginal men and boys where they would take them all to the island and chain them up there so that they couldn’t get back.

Are the issues with promoting Aboriginal tourism pretty much the same in other Australian states, or do they have unique challenges?
Most countries that were colonised by the English have similar challenges. I’m also the secretariat of the World Indigenous Tourism Alliance (WINTA) so I’ve been in conversations with counterparts in countries like Canada, America, New Zealand and Nepal. We found that we face similar challenges with our native title and getting our land back and the things that happen to us.

We are working together fantastically to host the World Indigenous Tourism Summit in March next year, which is inviting Aboriginal people from all over the world to come to Perth and talk about Aboriginal tourism in their country. That’s going to be a fantastic event and time of networking.

We brought Keith Henry, the CEO of Aboriginal tourism in British Columbia, here in about 2012 and out of that visit, the state Liberal government at the time put a programme together for A$1.46 million (US$949,700) and WAITOC ran that for four years as an Aboriginal tourism development programme.

How can tourism bureaus or travel agents work best with Aboriginal tour companies?
I think they’ve got to understand that there are a lot of cultural protocols around working with Aboriginal people and even challenges for Aboriginal businesses. For example, me being Nhanda – if I wanted to open a cultural business where I live right now, I couldn’t do that without permission.

I could open a fish and chip shop, but I couldn’t go talking about Aboriginal culture from the area because I’m not from the area. So, the only way to understand that is to talk with the traditional owners where they live, and understand that it’s up to them to tell their stories, because it’s their intellectual property. The best way is to support the local Aboriginal people in that area to tell those stories for themselves and support them in creating their own businesses.