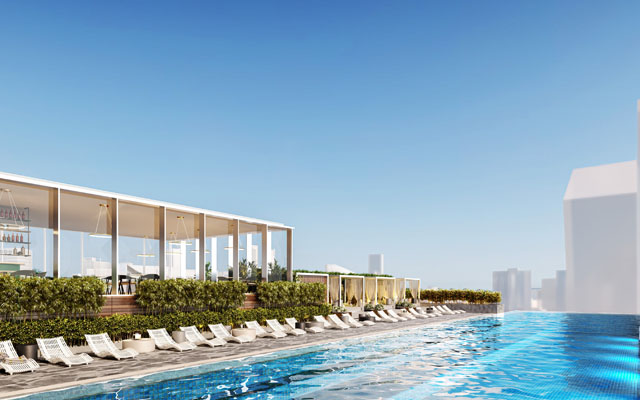 Capital Alliance and Australia’s TFE Hotels have partnered to develop a first-of-its-kind mixed-use development in Melbourne Docklands, set to open in 2026.

The A$340 million (US$229.7 million) project will feature the largest rooftop infinity pool in Australia and two hotels: the first purpose-built Collection by TFE Hotels with 200 rooms and has yet to be named; and the 105-key premium A by Adina hotel.

The two accommodation towers, connected by a sky bridge, will boast a 1,000-pax capacity event conference centre, surrounded by 360-degree views of the city. There will also be a day spa, retail shopping, and restaurant offerings.

Project designer SJB’s founding director, Michael Bialek, shared that the designs were inspired by natural elements like the sculpted landscape forms and proximity to the Yarra River and that the project would become an architectural landmark on the Melbourne skyline.

“Our partnership with TFE was born and galvanised during the uncertainty of the pandemic. It may sound cliché to say, but there are two things we’re certain of, developing a hotel is incredibly challenging and we have unparalleled confidence in our ability to deliver a world class establishment alongside TFE,” said Capital Alliance, CEO, Mohan Du.

TFE Hotels Group COO, Chris Sedgwick, said: “Each of our one-of-a-kind Collection hotels has a distinct story and, together with A by Adina’s brand premise around hotel living, offer guest experiences that are unique to their neighbourhood.

“We love that Mohan had a vision for Melbourne’s burgeoning Docklands area and that he and the Capital Alliance team have spent the last decade investing in and realising that vision.”