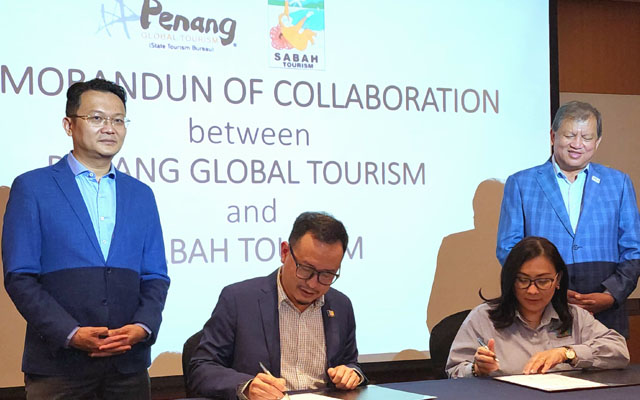 Sabah and Penang will be embarking on a cross-promotion of their respective tourism attractions after signing a Memorandum of Collaboration (MoC) on August 20.

Sabah Tourism Board’s (STB) chairman, Joniston Bangkuai, and Penang Global Tourism’s (PGT) Yeoh Soon Hin, described the MoC as a “momentous” event, noting that the two states share a similar commitment to the positive impact that tourism might have on the people and the economies of their respective states as well as the nation.

Some of the partnership goals include improving flight connectivity between the two states and facilitating the engagement of key parties in relation to the development of products and tourism.

Joniston shared: “I do think that this MoC is the first step to help us realise our friendship initiatives through tourism and hopefully it will lead to a similar collaboration with other states.”

SBT and PTG should establish a key performance indicator to assess the efficacy of their partnership and adjust as needed to realise their goals, he suggested.

Yeoh was optimistic that the partnership would help to boost the economies of both states and make them more resilient in the face of future challenges. With both parties sharing tourism ideas and creating dual destination packages for domestic and international markets, it would attract more visitors to the country.

“To me, the key to tourism success is breaking down siloed approaches. To succeed, we must work together, and this important partnership is a step to achieve our common goals,” added Yeoh.