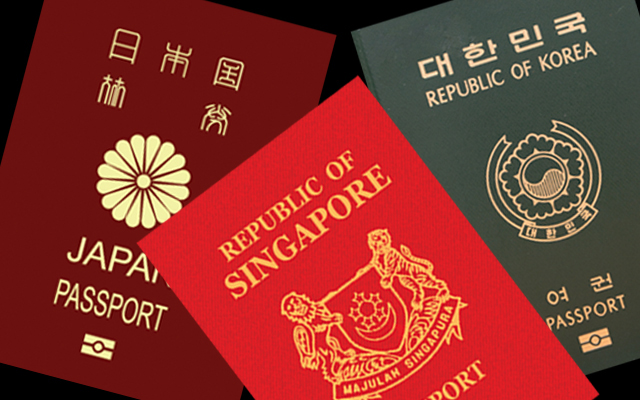 Japan, Singapore and South Korea possess the most powerful passports in the world, according to the latest results from the Henley Passport Index, which is based on exclusive and official data from IATA.

Japan holds the number one spot on the index, with a record-high visa-free or visa-on-arrival score of 193, while Singapore and South Korea come in joint-second place, with a score of 192.

Despite the unmatched and unprecedented worldwide access afforded to the citizens of these three nations over the index’s 17-year history, international passenger demand in the Asia-Pacific region has only reached 17 per cent of pre-Covid levels, according to IATA’s latest statistics, having hovered below 10 per cent for most of the past two years.

This figure is far behind the global trend where markets in Europe and North America have recovered to around 60 per cent of pre-crisis travel mobility levels.

EU member states dominate the rest of the top ten spots on the latest ranking, with Germany and Spain in joint-third place, with access to 190 destinations visa-free.

Finland, Italy, and Luxembourg follow closely behind in joint-fourth place with 189 destinations; while Denmark, Netherlands, and Sweden share fifth place with visa-free access to 188 destinations worldwide.

Both the UK and US have dropped down a rank, to sixth and seventh position, respectively.

According to the latest Henley Private Wealth Migration Dashboard, the UAE has also become the focus of intense interest among affluent investors and is expected to see the highest net influx of HNWIs globally in 2022, with a forecast net increase of 4,000 – a dramatic increase of 208 per cent versus 2019’s net inflow of 1,300 and one of its largest on record.

Exclusive research conducted by Henley & Partners reveals that top-ranking passports have almost regained pre-pandemic levels of access. By comparing the current level of travel freedom with the most severe Covid-related restrictions imposed over the past few years, results show that UK and US passport holders now have unrestricted access to 158 destinations around the world – as opposed to just 74 and 56 destinations, respectively, at the height of the pandemic in 2020. Japanese passport holders enjoy unrestricted access to 161 destinations, as opposed to only 76 in 2020.

The study also determined a strong correlation between a nation’s passport power and its peacefulness.

Henley & Partners noted that all of the nations occupying the top 10 spots on the Henley Passport Index can also be found in the Global Peace Index’s top 10 ranking. Likewise, for the bottom ranking nations.