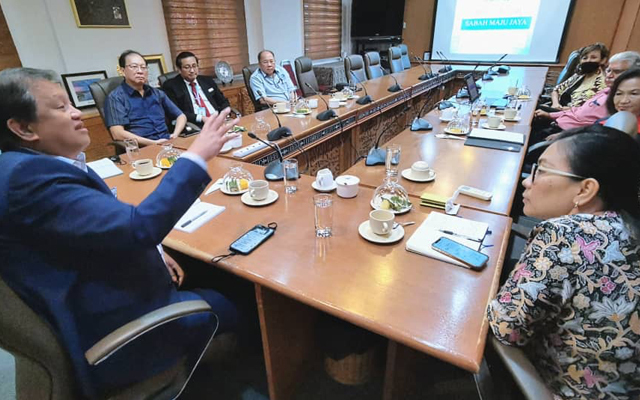 A plan is in the works to establish Sabah Health and Wellness Tourism Council (SHWTC) to market Sabah as a destination for medical tourism.

The pro-tem committee led by Anil Kumar met with the assistant minister of tourism, culture, and environment Joniston Bangkuai on June 13 to discuss the formation of SHWTC. The latter, who chairs the Sabah Tourism Board (STB), has been invited to be the advisor of the Council.

Anil said SHWTC will act as a one-stop centre for all matters related to the health paradigm.

“The council aims to provide impetus and focus to place Sabah health and wellness tourism on the world stage,” he said, adding that the state already has the required infrastructures and facilities.

He added that medical tourism will be a “new market” for the state, and will generate “high revenue”.

“We want to collaborate with STB on how we can effectively advertise this area and attract people from neighbouring countries, particularly the BIMP-EAGA region, to seek health and wellness treatment in Sabah,” said Anil.

Joniston gave assurance that the STB would work closely with members of the local medical community to make Sabah a choice of destination for healthcare tourism.

He shared: “Other states, like Penang and Malacca, already have their state healthcare tourism councils, so this move is timely. Accordingly, this is also in line with STB’s efforts to attract high-end travellers.

“We’ve had success in other sectors of tourism, such as rural tourism, and there’s no reason why Sabah can’t do the same in medical tourism.”

Joniston added: “We must work closely together to achieve the goal, develop strategic plans to promote health care services here, and look at prospective target markets, especially when Nusantara (on Borneo island, where Sabah state is also located) is set to become Indonesia’s new capital.”

Joniston suggested that SHWTC consider including representatives from relevant government and private agencies as members.

Nevertheless, she stated that STB was prepared to get on board with SHWTC to exchange experience and skills to develop a viable package for medical tourism in the state.

“It is essential to have local medical practitioners who can educate our stakeholders, such as hoteliers and tour operators, on the various healthcare options that are available to tourists.

“STB will be happy to collaborate with SHTWC to conduct a workshop for tourism players to increase their awareness on the offerings for medical tourism in the State,” she said.