Love at first sight for a young boy has blossomed into a lasting affair of 50 years. Leslie Danker, resident historian at Raffles Singapore, tells Karen Yue about his enduring love for the property. 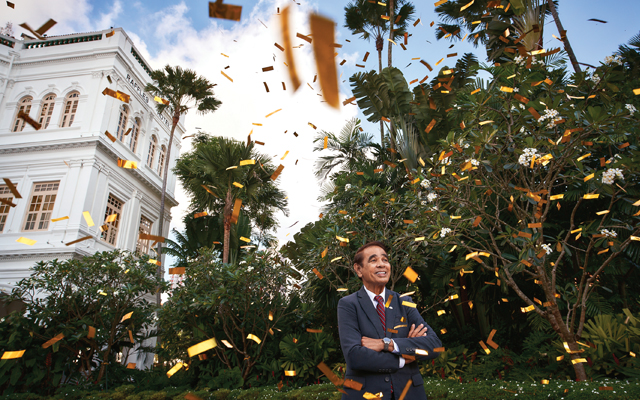 What made you give five decades of loyalty to a single employer?
This is my love story. I was schooled at St Joseph Institution down the road from Raffles Singapore, and I’d walk past the hotel every day. The colonial architecture attracted me and I would always wonder what’s inside.

I had my first beer in this hotel after I completed school. It was then that I finally saw the interior, which was nothing like what I had seen. I decided there and then that I would work here.

On March 15, 1972 I joined the hotel as a maintenance supervisor. It was a good thing, as the job allowed me to explore every corner of the hotel and brought me close to the interior and architecture.

The more time I spent at the hotel, the more I wanted to know about it. I spent a lot of time in the library researching. Did you know that the hotel started off as a 10-room bungalow, and in 1915 it created the Singapore Sling that put the hotel on the world map? Later, during the Japanese Occupation (1942-1945), Japanese officers stayed here.

There were many happy and sad moments for this hotel, but it persevered through time.

There are many stunning hotels in Singapore now. Have you never felt compelled to leave and explore work elsewhere?
Whatever the other glamorous new hotels have, we have it too at Raffles. But they do not have the rich history that we do. The hotel had so many significant events that were attended by famous personalities like Rudyard Kipling, Somerset Maugham, Elizabeth Taylor, and the Queen of England. Noel Coward even wrote a song for the hotel.

The Sarkies Brothers (founders of the hotel as well as many other luxury hotels throughout South-east Asia) once said of this hotel: we are not better than the best, but better than the rest.

So, if I have the best, why would I move on to the rest?

Raffles is special, and is now a part of me.

Did you play other roles at the hotel?
I was in F&B, HR and front office (at different stages). At the front office, I often had to answer guests who were curious about the hotel’s history and architecture.

After the hotel has designated a National Monument on March 4, 1987, a new company bought it over and ordered a complete restoration (in 1989) to bring back the hotel’s early grandeur. At that time, many staff were retrenched and it made me very sad to have to leave.

Quite fortunately for me, I was asked to take the new CEO around to show him the history and architecture of the building. At the end of it, he invited me to stay and contribute my knowledge to the new owners and management.

I was hired as site supervisor, and worked closely with engineers, architects and interior designers during the restoration. I learnt even more about the history of the hotel during the restoration because there were media reports about its beginnings and milestones. I bought a black notebook for all those clippings. This book is now on show in the hotel’s museum.

After the restoration, I was appointed information officer, guest relations manager and later, training manager. Eventually, they put me back in front of guests and soon after, the general manager made me the resident historian so I could keep telling my stories.

Since then, I have been conducting history tours for guests, taking on media interviews on the hotel’s heritage, and history training for new staff on orientation.

I’ve not stopped learning, and continue to do a lot of research to uncover facts about the hotel and its surroundings.

Today, it is common for hotel staff to call me throughout the day to ask about things like, how big the hotel is or how high the ceiling is.

My colleagues say I am a walking hotel history archive.

Which of these roles did you love most?
The resident historian, of course! When I interact with our guests on the hotel’s past, my stories make their stay come alive! Many came to stay because of the hotel’s architecture, but did not know much about the wonderful stories.

What is your one favourite story about the hotel to tell?
I am the only staff who has been here before the first restoration (in 1989), and had the privilege of working on the project.

When I joined in the 70s, there was a ballroom on the current iconic driveway. The Sarkies Brothers added it to gain more revenue. When the ballroom was demolished to allow for the restoration of the grand entrance, we discovered gravel underneath. Horses were the primary transport back then, and gravel was used in driveways (for better grip).

(Throughout the restoration works), we found broken porcelain with SB initials for Sarkies Brothers, original tiles from the past, original ceiling, and even the skeleton of a horse!

I was privileged to witness the transformation of the hotel back to the grand days of 1915.