With travel and social restrictions taken off the table, the Lion City is ready to beef up her sporting events calendar and welcome again spectators from around the world who will contribute to tourism recovery 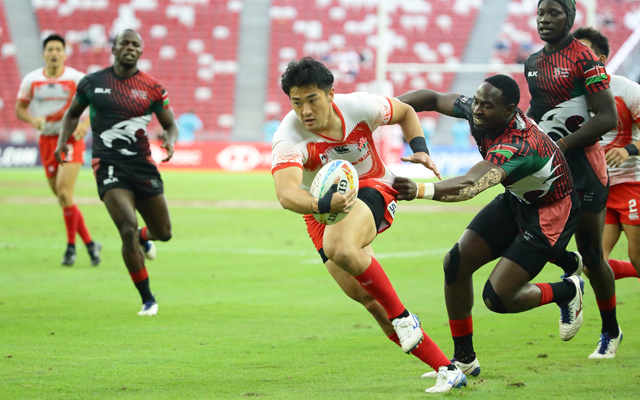 Singapore’s sporting scene is heating up this year. The HSBC World Rugby Singapore Sevens returned in April with live spectators and bustling off-pitch festivities, while the Formula 1 Singapore Airlines Singapore Grand Prix is waiting in the wings with promise of a race week of entertainment when it revs up on September 30.

Singapore’s sporting scene was never completely frozen throughout the past two years of Covid-19, but it had to plot a careful way back to a live audience. In 2020, some team sports were held in digital formats, such as eSingaCup 2020 and the Singapore Floorball Open Digital.

The move back to spectator presence started with a pilot event. ONE: Reign of Dynasties on October 9, 2020 was the first international sports production involving international professional fighters to be allowed to resume behind closed doors.

Following its success, ONE: Inside the Matrix on October 30, 2020 became the first sporting event post-lockdown to welcome a live audience of 250 spectators, and among the first to pilot the use of Covid-19 ARTs.

As economic activities resumed in 3Q2020, Singapore Tourism Board (STB) worked with sports events organisers to develop and implement rigorous protocols to ensure the safe resumption of such activities. Measures included strict testing protocols for foreign-based participants and crew, management of crowd density and group size throughout the event, and frequent sanitisation and cleaning of event premises.

The live sports calendar for 2021 kicked off with ONE: Unbreakable! on January 22. Many others followed, such as the ATP Tour 250 tournament in February, the HSBC Women’s World Championship golf tournament in April, as well as JSSL Singapore FA Cup, SingaCup 2021 and SG Floorball Open in December.

Reviving sporting events for an in-person audience is critical for Singapore as a destination, said Ong Ling Lee, STB’s executive director of sports and wellness, as they are an integral part of the destination’s strategy to bring in quality visitors.

“As more visitors return to Singapore, it is crucial to continue creating and delivering innovative and exceptional sports experiences for athletes and fans. This will help to build visitor arrivals and drive tourism receipts in the long-term,” said Ong.

For years, Singapore has seen how major sporting events contribute to tourism earnings and destination presence.

According to STB records, the Singapore F1 races were attended by more than 550,000 unique international visitors between 2008 and 2019; foreign visitors made up more than 40 per cent of total race-goers. The 2019 edition saw the second highest attendance since the first race in 2008, with 268,000 spectators.

The races generated a global television audience of more than 930 million viewers, and presented the city-state with more than S$1.5 billion (US$1.1 billion) in incremental tourist receipts.

The annual HSBC Women’s World Championship drew more than 30,000 attendees on average every year pre-pandemic, with 30 per cent of spectators coming from overseas. International media value for the 2021 tournament peaked at S$372 million.

In 2019, the match between Manchester United and Inter during the International Champions Cup attracted almost 53,000 spectators. Total attendance at the event was 103,340, of which 25 per cent were foreign visitors. Overall broadcast of the event in Asia-Pacific acquired close to 25 million viewers.

Another regular event, the Standard Chartered Singapore Marathon, saw almost 50,000 participants in 2019, of which 20 per cent were international visitors.

Beyond the pitch
In taking its editions around the world, HSBC World Rugby Sevens has found that the games attract a following of people who will come to the host country to support their favourite teams and enjoy the party atmosphere.

“When they travel to the country to join the Sevens Series, they also take a long weekend to enjoy all the activities beyond the stadium,” stated Doug Langley, HSBC World Rugby Sevens, series director, who spoke to TTG Asia ahead of the Singapore Sevens earlier in April.

Both the Sevens Series and the host city enjoy a win-win partnership, as a supportive host destination will build excitement around the games.

The Singapore Sevens opened just as the city-state eased social restrictions, permitting F&B consumption in the stands and a range of entertainment lined up for spectators.

The return of the festival vibe propelled ticket sales, with 60 per cent of tickets snapped up within days of sale issue, shared Steven Rodaway, general manager of HSBC Singapore Rugby Sevens. Ticket sales only opened on April 3, just days before the event kicked off on April 9. The Greenyards Club hospitality booths were also swiftly wiped off the shelves.

Langley said that while action on the pitch was important, it was just as critical to engage the fans during and around the games. The level of entertainment varies across host cities. Some focus mainly on interactions in the stands – through music, performances and games – while others take engagement beyond the stadium. Citing an example, he said the Dubai Sevens had invitational events happening in various locations.

For the 2022 season ending August, games are played in Dubai in the UAE; Malaga and Seville in Spain; Singapore; Vancouver and Langford in Canada; Toulouse in France; London in the UK; and Los Angeles in the US.

When asked what shapes the decision on host cities, Langley pointed to a supportive local rugby union, reputation of the city, and the level of support from the city authorities.

“We obviously want iconic venues that will get a high level of excitement around the Sevens Series and bring onboard partners that want to be in those stunning destinations,” Langley said.

“They must also be relevant places that are conducive for the sport. More often than not, we look at the interest of the city to be part of the Sevens Series, to get the support needed to create a robust event. Such support could be financial or in kind, like venue allocation.”

When the HSBC Women’s World Championship was in town, Hilton Singapore Orchard accommodated all players and their entourage, giving the new hotel a strong start in the marketplace.

Langley said the Seven Series has partnerships with various tourism players, such as airlines and transport companies. However, hotels form a “big part of our tourism partnership… because we have to house so many teams”.

Underscoring the value of high-profile sporting events, Marc Handl, vice president, operations, PPHG, said they “generate immediate demand for the hotel sector, and in the long run, they boost the country’s destination visibility and appeal in the global market”.

“This translates into benefits for hotels here, as we are able to enjoy the exposure on the world stage and capture the opportunity to showcase our properties to clients and guests across the globe,” he added.

Recalling the business impact of the Singapore F1 races pre-pandemic, Handl said Pan Pacific Singapore, as a track-side hotel, would enjoy an average of 80 to 90 per cent occupancy during the race weekends. Most of the hotel’s function spaces on level 22, which offer great vantage points of the track, were booked during the pre-Covid race periods. Track-side guestrooms and suites were also a hit with incentive groups.

Handl noted that even hotels far from the action have stood to benefit from leisure and corporate demand. With off-track properties escaping the government levy on F1 track-side hotels, rooms rates were more attractive.

Recognising the power of sports, Marriott Bonvoy Moments platform – Marriott International’s travel programme – has been offering exclusive member-only experiences at important sporting events around the world. Some of the packages include VIP access to an exclusive gala dinner with the Mumbai Indians, tennis clinics hosted by tennis legends as part of Marriott Bonvoy’s multi-year collaboration with Tennis Australia, and the opportunity to watch the race from the pit wall canopy at the Formula 1 Heineken Australian Grand Prix, shared Delgado.

At the upcoming Singapore F1, Marriott Bonvoy will bring back the Silver Arrows Lounge at The Ritz-Carlton, Millenia Singapore.

Bulking up the sports and wellness calendar
Singapore tourism players can expect to benefit more from sports tourism in the coming years, as STB is pressing on with its courtship of additional sporting events for the city-state.

The tourism bureau recently won the bid to host the Women’s World Floorball Championship in 2023, and placed a joint bid to stage the World Athletics Championships in 2025, shared Ong, adding that efforts to engage sports events organisers and game publishers to cultivate a pipeline of world-class sports and esports events will only continue.

Ong said Singapore’s sports tourism ambitions align with Singapore’s positioning as an urban wellness haven – a goal that was emphasised at the STB’s Tourism Industry Conference in April.

In the space of wellness tourism, which is projected to grow in the next five years to reach US$1.1 trillion by 2025, STB has a vision for Singapore to be a destination with a wide range of holistic wellness experiences.

To that end, Singapore will launch the Wellness Festival Singapore this June, featuring a line-up of activities such as wellness masterclasses at Gardens by the Bay, an inaugural Livewell Festival at Sentosa, and a series of art, wellness and mindfulness programmes at the National Gallery Singapore.

More activities will be announced in time to come.