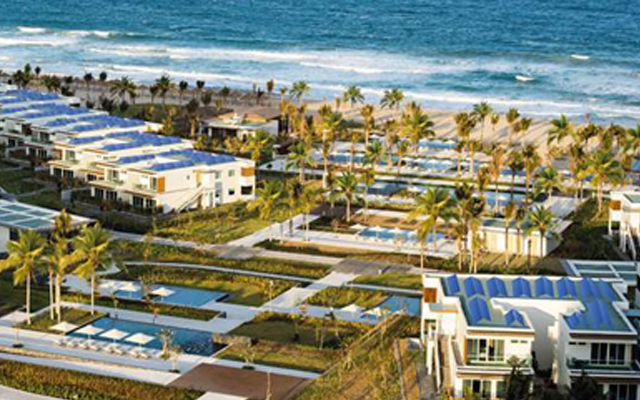 Vietnam’s Alma Resort is installing 5,634 solar panels on its extensive infrastructure as part of an ambitious solar power project that is expected to reduce the property’s carbon dioxide emissions by up to 72,670 tonnes over a 25-year period and save up to US$16.85 million in electricity bills.

The panels will be mounted on 196 pavilions, two V-shaped towers housing various hotel facilities, and the utility building. Operating at a capacity of 2,480 kilowatts peak, the system will power almost half of the resort’s energy needs, depending on its occupancy rate.

According to a statement from Alma, Vietnam has overtaken Thailand as South-east Asia’s largest solar market with hundreds of solar projects under construction. Alma’s managing director Herbert Laubichler-Pichler believes it will soon be incumbent for five-star resorts across the country to follow suit.

“With the weather we have in Cam Ranh, it makes total sense for us to take advantage of an abundance of sunlight and embrace a more sustainable and environmentally-friendly alternative to electricity,” said Laubichler-Pichler.

The solar rooftop modules throughout the resort are engineered, implemented and financed by German companies C Melchers (Vietnam), Aschoff Solar and a German financial institution.

The resort will pay for the system in savings made on its electricity bills within the first decade of operation.

“After the costs are taken out to pay for the solar technology, Alma will still save an additional US$1.96 million on electricity within this 10-year timeframe,” Laubichler-Pichler said.

The resort’s solar project is expected to generate 3.83 million kilowatt hours of energy in its first year of operation. Excess solar energy from one part of the system is used by other facilities on the grid.

The resort also launched a mobile app called Alma Resort last year, which allows contactless communication between guests and staff in real-time during the pandemic, and also serves as a sustainable solution with digital menus, resort maps, and more.