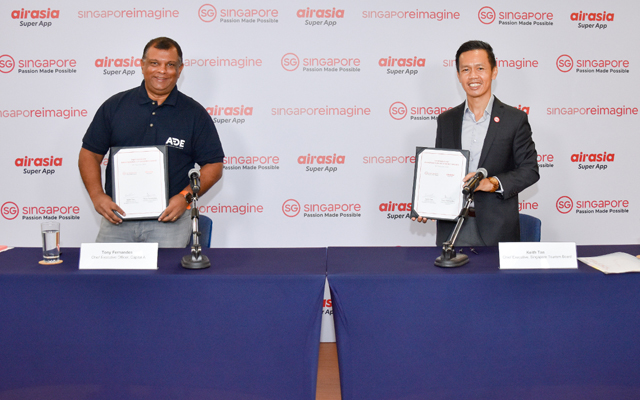 Airasia and the Singapore Tourism Board (STB) have signed a Memorandum of Understanding (MoU) to promote travel from South-east Asia to Singapore with help from airasia’s Super App.

As part of this partnership, users of the Super App, which has travel and lifestyle offerings, can now book tourism experiences in Singapore, such as flight and hotel packages, meals and other experiences.

Both parties will work together to pilot digital solutions to enhance the visitor experience, as well as exchange knowledge and insights that will deepen their understanding of travellers from South-east Asia markets.

“While the goal is to bring more people to Singapore (and increase connectivity), for this instance, it’s also for us at airasia to promote that we’re not just selling airasia inventory, but many other airlines, as well as hotels and attractions in Singapore (through the Super App),” said Tony Fernandes, CEO of Capital A.

When asked how the ongoing Omicron wave might affect this partnership, Keith Tan, CEO of STB, said Omicron infections would eventually peak and go down, making it important to “start building for demand now”.

“We can’t wait for Omicron to die down before we start making plans for recovery; it would be too slow and too late,” Tan said. That is why Singapore has established VTLs with several South-east Asian countries, with the intention of establishing more, as “regional markets are very important for us in the first phase of recovery”.

However, for travel in the region to be seamless, Fernandes stressed the need for “one policy within the 10 countries”, as opposed to the current situation where every country has a different policy.

A useful step that South-east Asia can work towards, Tan stated, is “making the different protocols easier to understand by travellers” both from outside and within the region.

As for how low-cost travel might look like in the future, Fernandes told TTG Asia: “I think low-cost, shorthaul travel will bounce back first. We’re seeing an incredibly strong rebound in domestic, which is a precursor to borders reopening. (Once they do), rebound will be very, very quick.”

When TTG Asia asked if low-cost airlines would continue to offer low fares in the face of post-lockdown high travel demand, which has resulted in air fares rising dramatically, Fernandes believes that budget airline prices will “always be significant lower than full-service carriers”.

He added that airasia would maintain low fares because “lower fares will stimulate demand”.

“The lower the fare, the more the demand. We believe in creating demand, and not driving fares up,” he said.