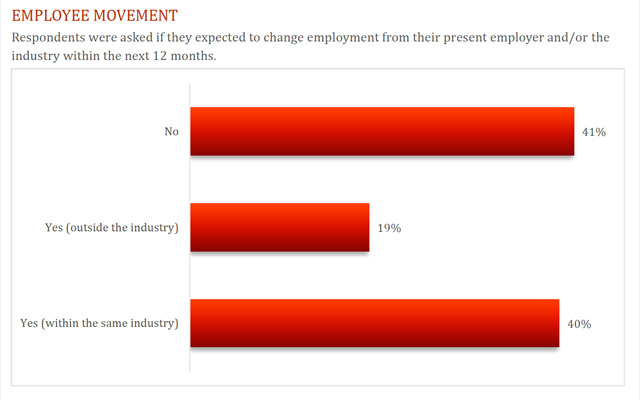 Emerging recovery across travel, tourism and hospitality businesses has facilitated improvements in employee sentiments and hiring confidence in the Asia-Pacific region, found the ACI Report 2022 which was released on January 31 this year.

The annual report, conducted with 820 travel, tourism, hospitality and lifestyle personnel across the region, has identified a reduction in retrenchments in 2021 – 12 per cent compared to 24 per cent in 2020. Employee sentiments have also improved, with 46 per cent believing the worst is now behind them. Similar optimism is seen among HR and hiring managers, with 45 per cent of such respondents expecting new headcount in 2022 – levels not seen since pre-pandemic.

However, hiring managers expect a tougher time when they eventually recruit. They are most concerned with a lack of qualified candidates and challenges in finding the right talents; high competition for talents, thus driving up salaries and increasing their budgets; and work-from-home expectations of candidates that may not align with their company’s return-to-office policies.

In terms of salary satisfaction, only 26 per cent of respondents received a pay increment in 2021 – a slight drop from 2020’s 28 per cent and far behind pre-pandemic levels of 65 per cent. Thirty-seven per cent enjoyed a bonus in 2021, similar to 2020’s 39 per cent, although the majority (36 per cent) was given less than one-month’s bonus while 35 per cent received one to two months’ bonus.

Career development continues to be valued by respondents, with 68 per cent indicating that this was either “extremely important” or “very important” to them. Thirty-five per cent of respondents say that their current employer offered “excellent” or “good” opportunities for career progression, slightly higher than 2020’s 32 per cent.

At the same time, 38 per cent said career prospects with their current employer were “poor” or “zero”, up from 34 per cent.

Respondents’ desire to exit their current job or industry appears less intense compared to last year’s findings. Fifty-nine per cent of respondents expressed plans to change employers and/or industry over the next 12 months, with 19 per cent of them keen to explore opportunities in other industries. In the ACI Report 2021 report, the exit desire was stronger – 68 per cent wanted to leave their jobs, with 27 per cent of them looking to switch industries.

While salaries fluctuated across different surveyed countries, there was a noticeable drop in salary for certain positions, particularly senior leadership positions such as the CEO. The UAE recorded the highest average salaries (US$146,142) and which also rose sharply from the previous year with a 34 per cent jump – signifying that the region is well into recovery phase.

Hong Kong (US$104,921), Thailand (US$94,649) and Singapore (US$91,895) were the next highest averages from the survey. Indonesia (US$42,512) again posted the survey’s lowest average salary and an additional 10 per cent slide against last year’s figures, highlighting the country’s dire tourism situation. A detailed copy of the ACI Report 2022 can be downloaded here. It includes a special Covid-19 supplement to help both employers and employees alike of travel, tourism and hospitality industries make sense of such challenging times.